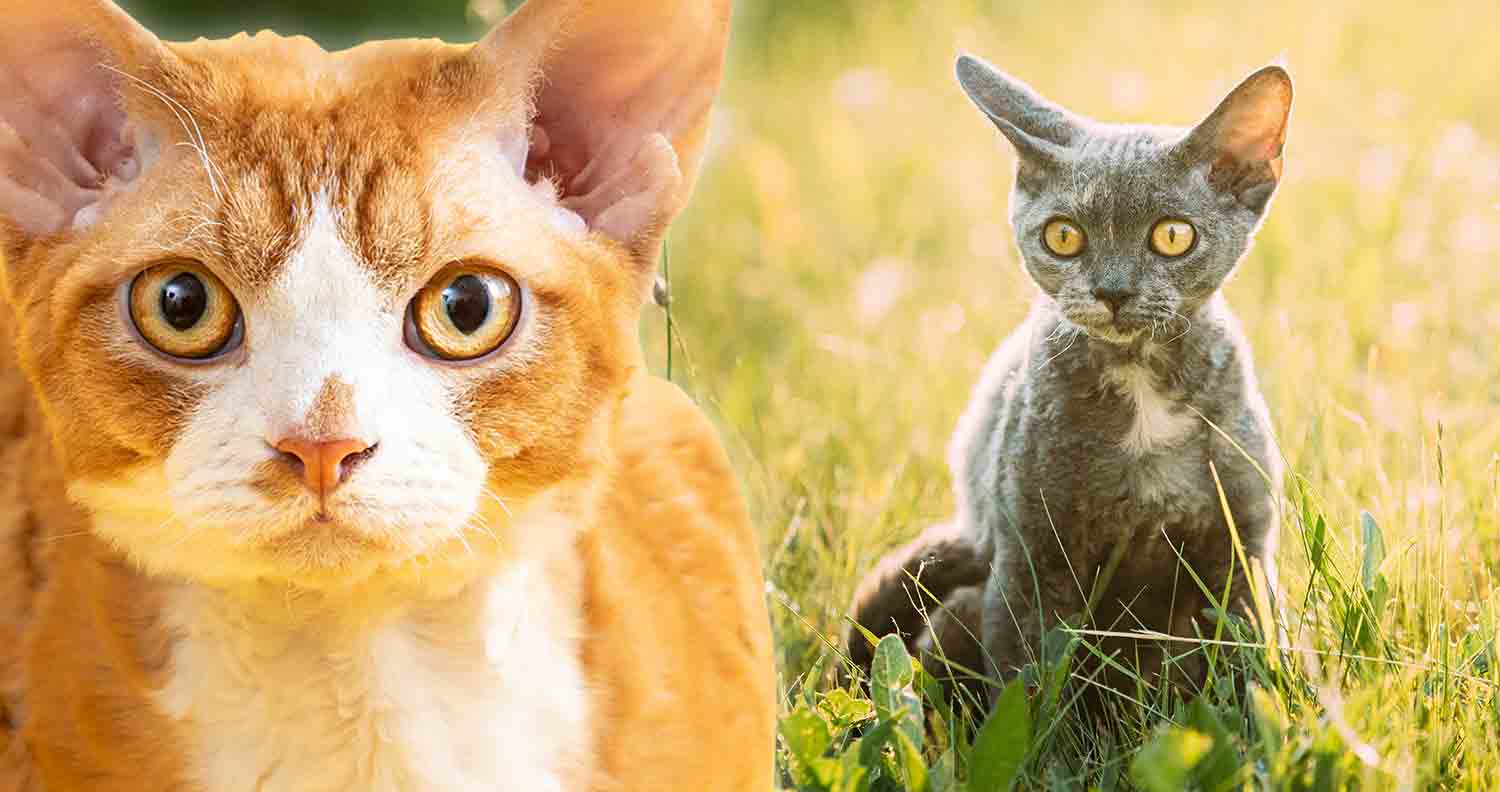 The Devon Rex cat breed is an eye-catching and exotic cat with tons of unique features to mention. Unlike other exotic felines, the Devon Rex is surprisingly small, with a large head and a broad chest. Most females have lighter boning, while the males have medium-strength bones.

It's no secret that these kitties have an unusual appearance, with a triangular head shape and a unique nose. The large eyes make these felines extremely endearing, alongside their massive ears, which are set quite low on the head. The Devon Rex's butterfly ears, along with soft and gentle facial features, give these cats a fairytale aesthetic.

The Devon Rex will grab anyone's attention with its appearance alone, but it's the playful and sociable nature of this feline that really captures your heart.

A Quick History of the Devon Rex Cat Breed

It won't surprise you to learn that this cat breed's origins start in the Devonshire region of England – which is where the name actually comes from. Experts believe that a domestic short-haired cat joined forces with a tom cat that had a uniquely curly coat. The resulting litter was a new type of kitten that gained immediate recognition for its unique fur – the Kirlee.

At the time, the belief was that the Kirlee shared a curly coat gene with the Cornish Rex, another "Rex" breed that was active in the UK at the same time. Breeders combined Cornish Rex and Kirlee felines to produce kittens with similar coat qualities. However, the kittens always had straight coats. Eventually, the breeders agreed that there were different breeds in place here.

A new breeding program emerged to preserve the natural gene mutation that caused the Kirlee curly coat. In 1968, the first Devon Rex cat appeared in the United States, and the breed gained official recognition from the Cat Fanciers Association in 1979.

The Devon Rex is now available from a host of reputable breeders throughout the UK and the USA. However, the breed is still very unique, and eye-catching enough to turn some heads. 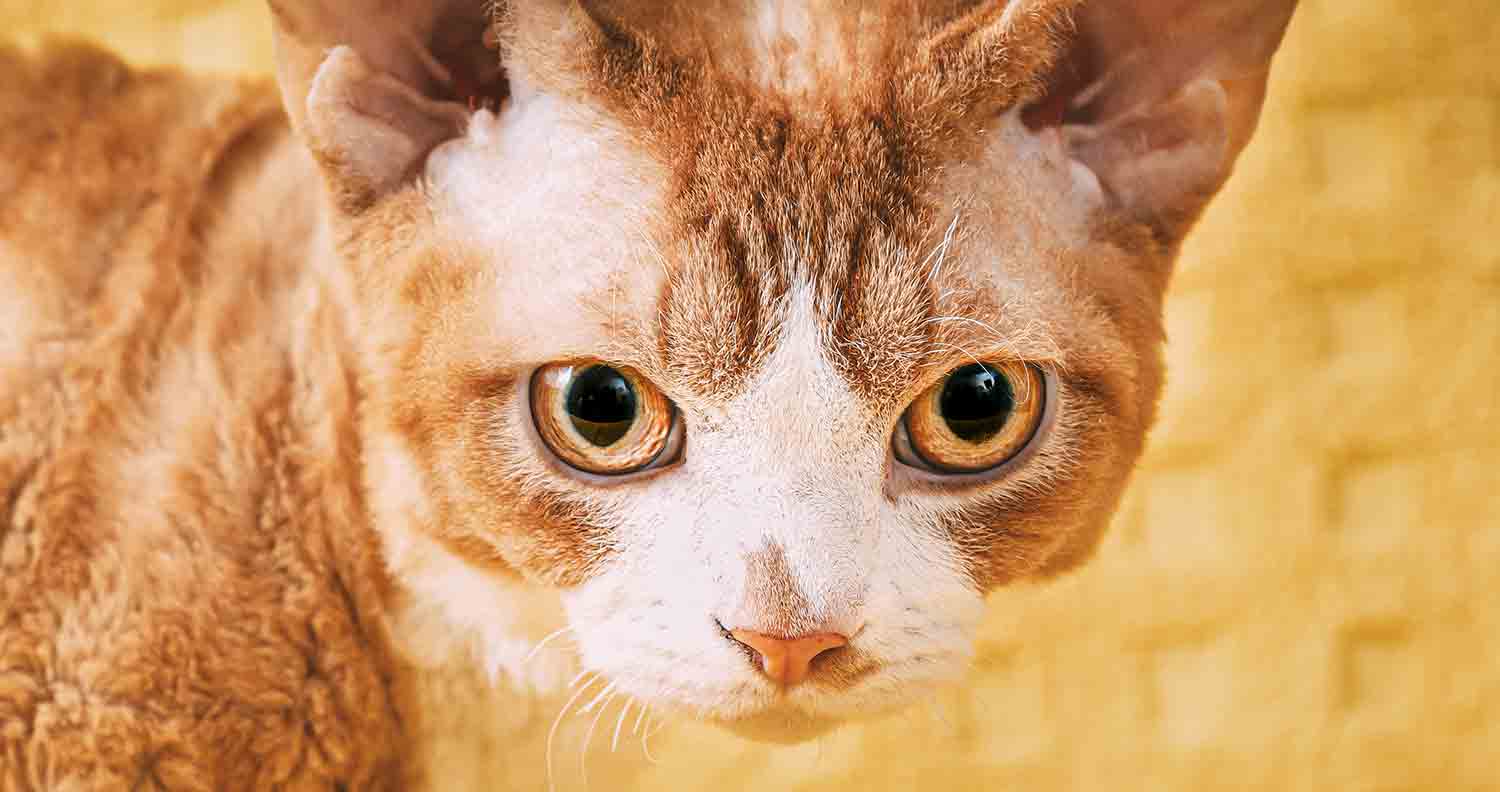 As mentioned above, it's the unmatchable beauty of the Devon Rex that really captures attention for feline lovers around the world. However, the highly intelligent cat is also extremely loveable and sociable too – making it a fantastic companion. You can train your Devon Rex to perform tricks, and it will return any love and affection you send its way by the bucket load. However, the high level of intelligence that these cats have also mean that you need to dedicate a lot of time and energy to stimulating their minds and keeping them entertained.

Thinking of adopting a Devon Rex? Then you better have a lot of love to give. These cats need a serious amount of attention and affection. They're most happy when they're in the company of other animals, or humans. Although they're not as vocal as some breeds, this is a cat that has no problem making sure that it's seen and heard.

If you're looking for a feline with an active personality, the Devon Rex cat breed has you covered. The outgoing and intelligent personality they exude make them a fun companion, plus they're great at learning tricks. However, you might find that you have some issues with training your Devon Rex at first, particularly when it's a mischievous kitten. Clicker training might be a good idea here.

To keep your kitty entertained, make sure you spoil them with plenty of toys and climbing posts for them to jump around on. Remember that the Devon Rex loves having high spots to clamber to when they're resting or playing. You might want to consider creating nesting points in lofty spaces.

With a thin and delicate coat, the Devon Rex will turn to you for warmth and comfort, so you can expect a lot of snuggling and lap time. These felines are also very social with other animals when properly socialized. You might find them curling up on your dog, or in the fur of another cat. If you don't have another pet (or if you do), make sure your Rex has a warm bed it can curl up in.

For those who don't like grooming, Devon Rex cats don't require a lot of work. The coat is very fragile, so you shouldn't brush it at all. If the fur gets dirty, consider wiping it gently. Excessive grooming can easily lead to bald patches.

Keep in mind that though the fur of the Devon Rex is fragile – the cat itself is anything but. A healthy feline in this breed can easily leap into high spots and keep you on your toes. Be careful that they don't get into any tricky spots. It's also worth keeping an eye on your cat's earwax, as it does have a tendency to build up with Rex breeds.

Good news! You shouldn't have to worry too much about trips to the vet with aDevon Rex. This breed isn't known for having too many health ailments, but there are some conditions you should be aware of. For instance, Devon Rex cats can suffer from patellar luxation (slipped kneecaps), and problems with their hips too. 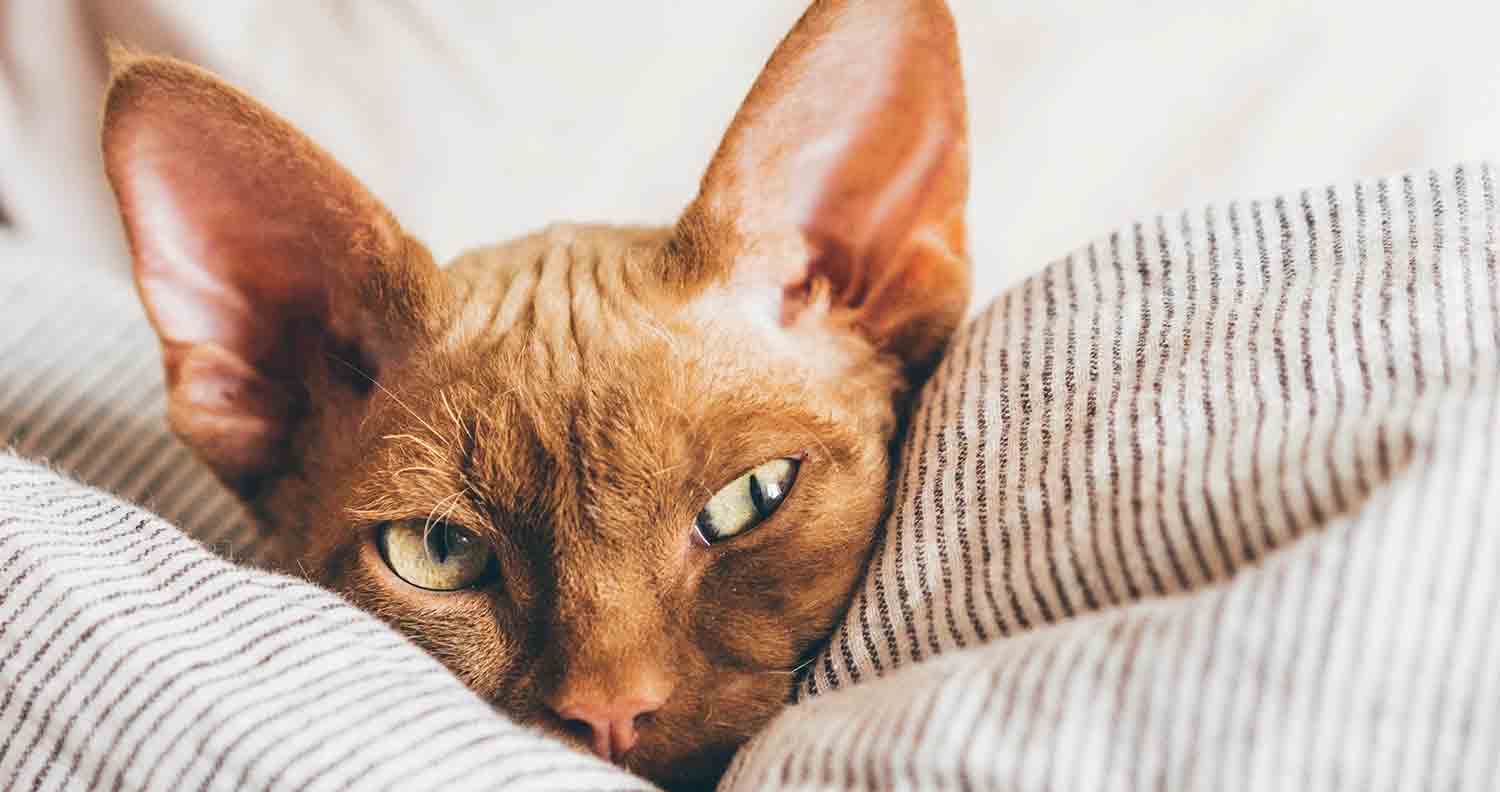 Genetic conditions may include Devon Rex Myopathy, which is a genetic condition producing symptoms between the ages of 3 weeks to 6 months. You should definitely check for any genetic issues in the parents of the kitten you buy. Look out for muscle weakness in your kitten or cat to determine whether you need a vet visit.

Another point to note is that because of the thin coat and short fur of the Devon Rex, it's more easily affected by weather extremes. Minimize your cat's exposure to direct sunlight to reduce the risk of sunburn and protect your kitty from cold temperatures.

Recommended Diets for the Devon Rex

To keep your Devon Rex healthy, you're going to need to feed him or her the right diet. Many Devon Rex owners will tell you that these kitties love their food. They do have a habit of trying to take food from your plate while you're eating. As tempting as it might be to let them snatch something from time to time, a Devon Rex shouldn't eat too much human food.

Make sure that you speak to your vet about creating a stable diet for your Devon Rex. You'll need to think about extra food supplements to protect their coats too, so ask a professional about this. Remember to only give treats in moderation. 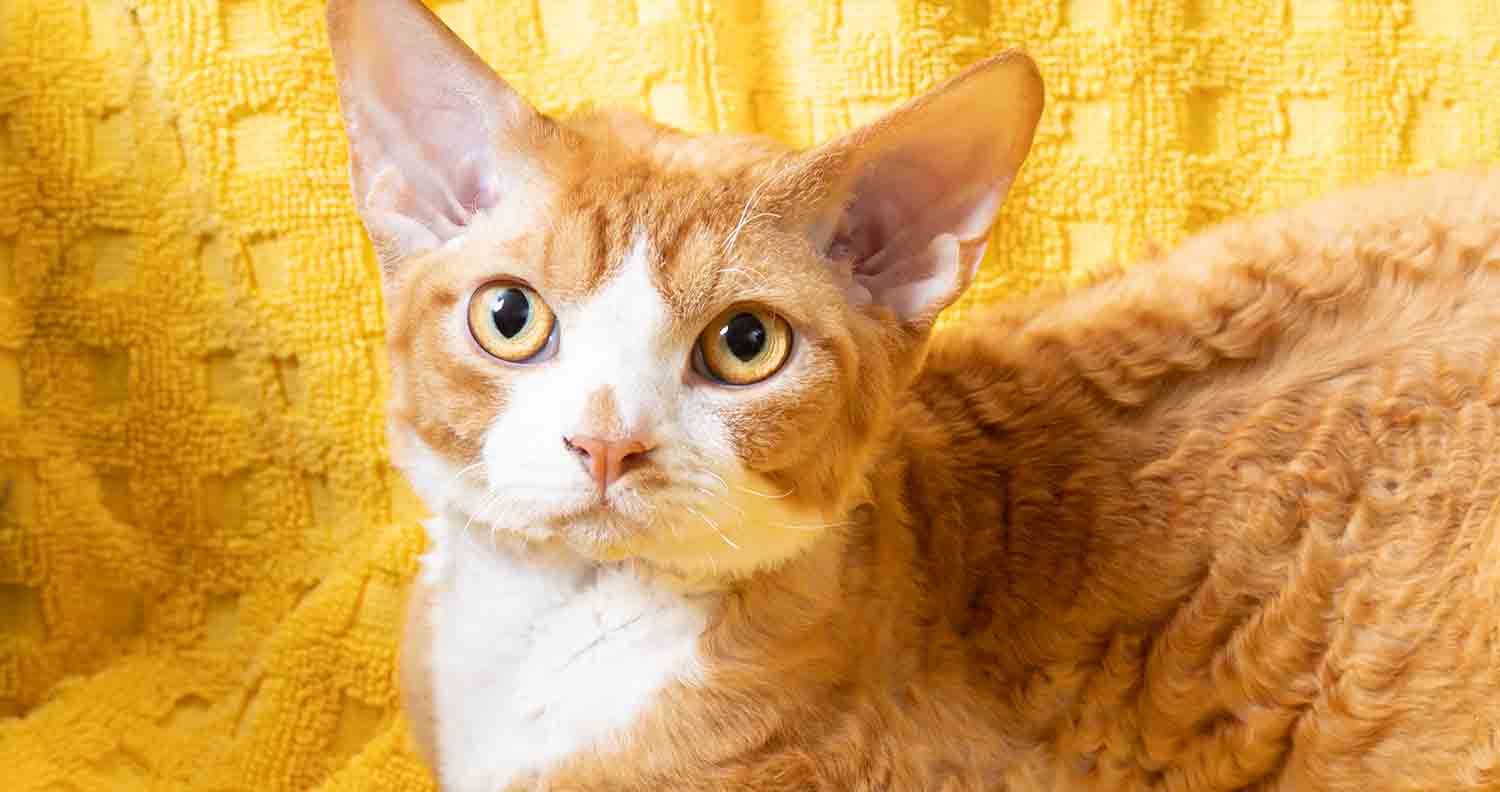 Some Helpful Facts About the Devon Rex

The Devon Rex is a seriously cool cat, and one you can easily fall in love with – no matter how you might feel about felines in general. This unique kitty may have even changed the pop culture world as we know it. After all, Steven Spielberg says he was inspired to create characters like Yoda and ET based on his Devon Rex cat.

Devon Rex's don't weigh a lot, but they're very strong and slender, with a lengthiness to them that can make them appear bigger than they are. Petting one of these cats feels like dragging your hand over soft suede. Just be careful not to pet too much.

The Devon Rex cat breedis a super active and energetic breed – as well as a total prankster who will always be making you laugh with each unique performance. However, you will need to reward your Devon Rex with plenty of affection and attention.

Devon's love a warm place to stay in the sun, provided with tons of extra affection in the winter. Just make sure that you don't brush these kitties, as their fur is far too fragile.