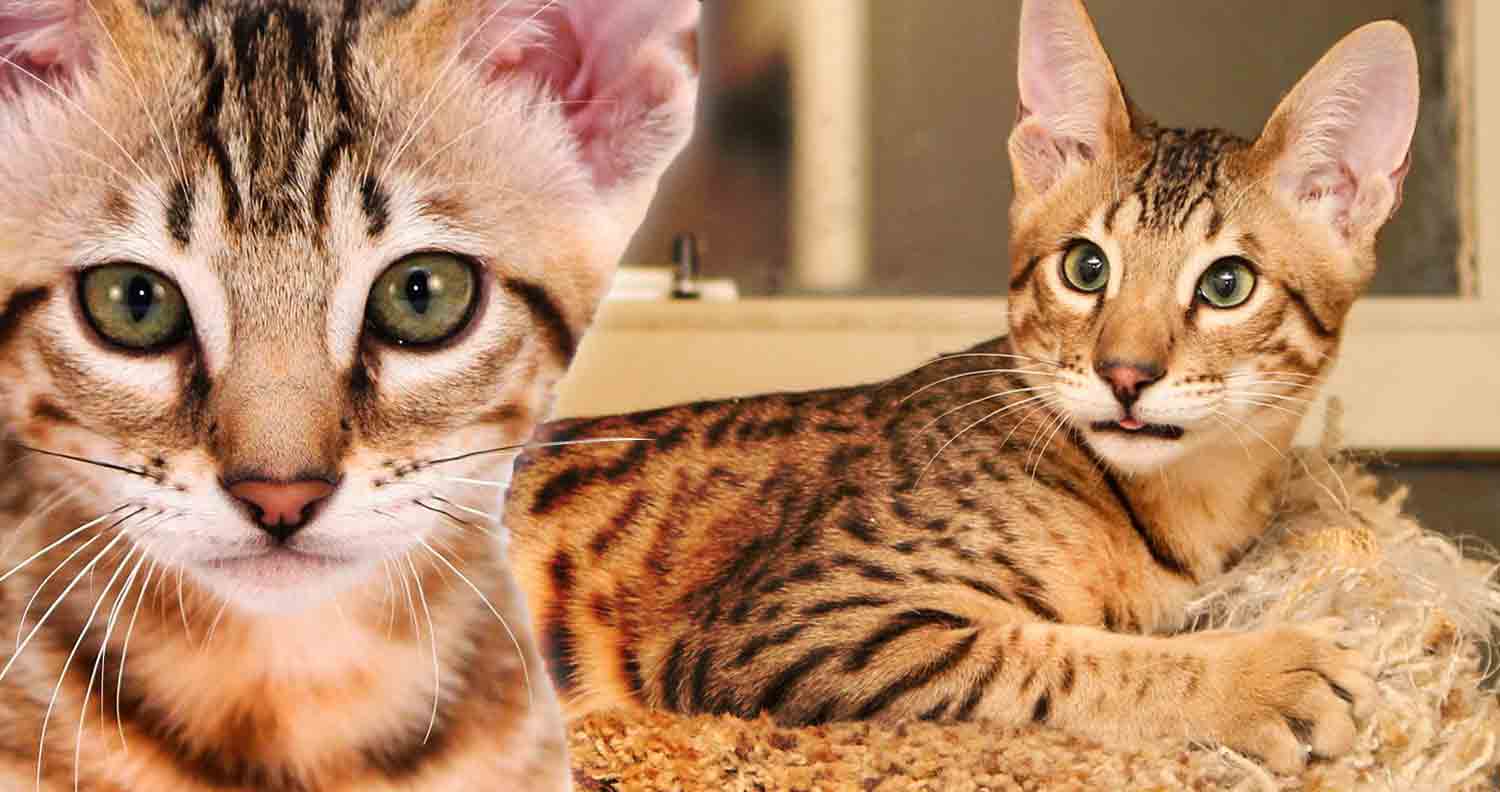 The Savannah cat is one of the most incredible breeds around in my (slightly biased) opinion. I’ve had a Savannah of my own for a good three years now, and he’s unlike any other feline I’ve known. Even before I adopted my boy, I was enthralled by the slightly wild-looking, exotic breed.

The Savannah cat is a hybrid cross between a domestic cat, and the African Serval. The name Savannah actually comes from the natural habitat of the serval. These amazing cats are often a lot taller than most common cats, with huge ears, a long neck, and big ears. Savannah cats feature a spotty coat with the occasional stripe in places.

Savannahs are a handful to raise, but they’re also extremely affectionate and sociable.

A Quick History of the Savannah Cat

So, where did the Savannah cat come from? Details are a little sketchy here, but most experts agree that the first successful breeding of the Savannah cat happened in the early 1980s. A Bengal breeder in Pennsylvania named Judee Frank worked with a man called Patrick Kelley in the 1990s to develop the breed. The International Cat Association accepted the breed in the 90s.

Compared to many cat breeds, the Savannah cat is relatively new. However, this kind of cat is also extremely popular. There are tons of breeders worldwide, and even different kinds of savannah cat to explore, from grey and black cats, to the standard tawny color.

Interestingly, a male Savannah cat isn’t fertile until around the sixth generation removed from its parent. This means that females are much more appealing to adopt for breeders. If you ever go looking for a Savannah cat to adopt, you’ll notice that their genetics are ranked by a series of “F” numbers. An F1 savannah cat has one parent that’s a domestic cat, and one that’s a serval. This is the largest, and wildest form of the savannah cat.

By the time you reach F4, your Savannah cat will have a temperament that’s more in line with the standard cat. You can feed your cat more of the typical cat foods here, and they won’t need as much special care. However, later-generation savannah cats still maintain their stunning appearance.

Unfortunately, because of the hybrid background of theSavannah cat, you may not be able to own one in some cities and states. Regional legislation still prevents some homeowners from owning exotic pets. It’s worth double checking that you can house one of these cats before you begin looking for a breeder.

The Savannah cat is a beautiful feline that looks a little like a Bengal in some places, however, their spots are less defined than the Bengal’s rosettes. 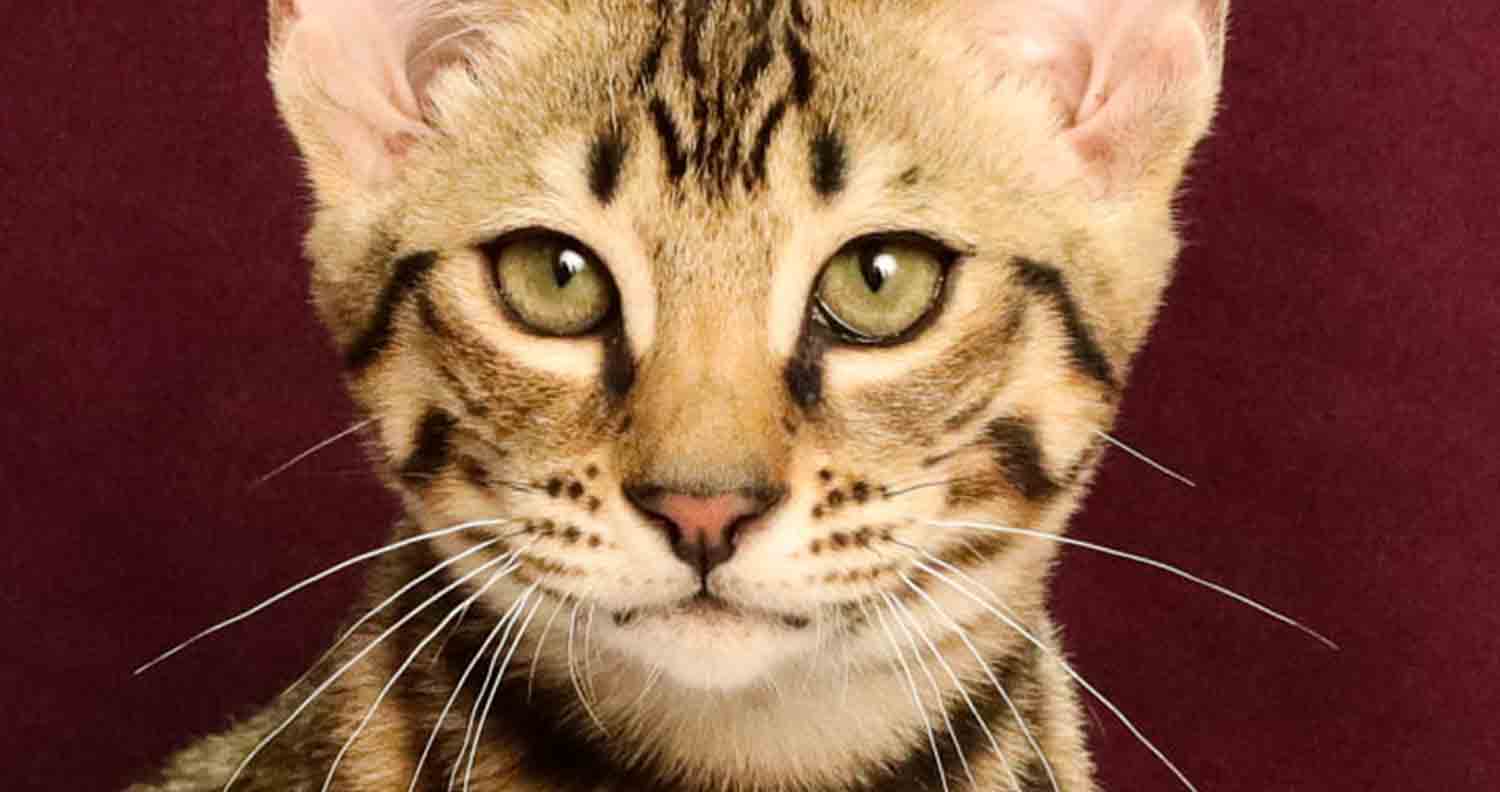 Characteristics / Attitude of the Savannah Cat

The wild and exotic appearance of theSavannah cat causes some people to believe they may be dangerous. These are large cats, bred from exotic animals, with particularly big teeth. My savannah’s fangs jutt slightly over his bottom lip.

However, the Savannah cat isn’t as intimidating as it seems. These cats love children and other animals, and they’re extremely loyal – just like a dog. Savannah cats are very affectionate and playful – they’ll wear you out in no time.

The amount of work you’ll need to do to care for yourSavannah cat depends on several things, including their F level. If you have an F1 Savannah cat, then it will need much more exercise than an F4 and lower. The good news is that maintenance is usually quite simple if you have the cash and the energy.

You’ll need to brush your cat on a weekly basis to help prevent hairballs, as these short to medium-hair cats can shed more than you’d think. It’s also a good idea to regularly trim your cat’s claws, or use claw caps if you’re trying to prevent scratching. Savannah’s tend to scratch a lot.

If you’re willing to do the work, the Savannah cat is a loyal and dedicated companion. My boy is constantly curling up in my lap or snuggling onto my chest. He’s sociable and loves to be around other pets – which could be an issue if you don’t have other animals. The highly energetic and playful nature of the Savannah means that the cat can easily get lonely if you’re not around much.

Savannah cats have a habit of following their human around the house and getting involved in everything you do. However, they’re picky about when they’re willing to take affection.

Savannah cats are extremely strong and athletic, making them excellent jumpers. Mine has no problem jumping on top of a door or bookshelf in one leap. There’s no way to stop them from getting on top of counters or tables easily. Plus, its worth noting that these intelligent breeds can learn how to get what they want.

My Savannah cat learned how to open doors and cupboards very quickly, so you may need to invest in some child locks if you’re storing anything dangerous, like bleach. I’d also recommend keeping food out of reach, as your Savannah will happily tear open packages without your help.

Savannah cats don’t mind playing in water – but they’d still rather avoid a bath in most cases. They’re often very dog-like in their ability to take to harness training very quickly. You can clicker-train them to perform tricks (mine fetches the post every day). Plus, savannah cats absolutely love playing fetch. My boy will bring toys back to me for hours on end.

Remember that although Savannah cat get along well with other animals and children, it’s worth making sure that your breeder has socialized your kitty before you pick him up.

One massive bonus of owning a Savannah cat, is that they can live very long and healthy lives. These animals are very healthy, provided that you feed them the right diet and commit to the right vet visits. However, they are a little more prone to hypertrophic cardiomyopathy than other felines. 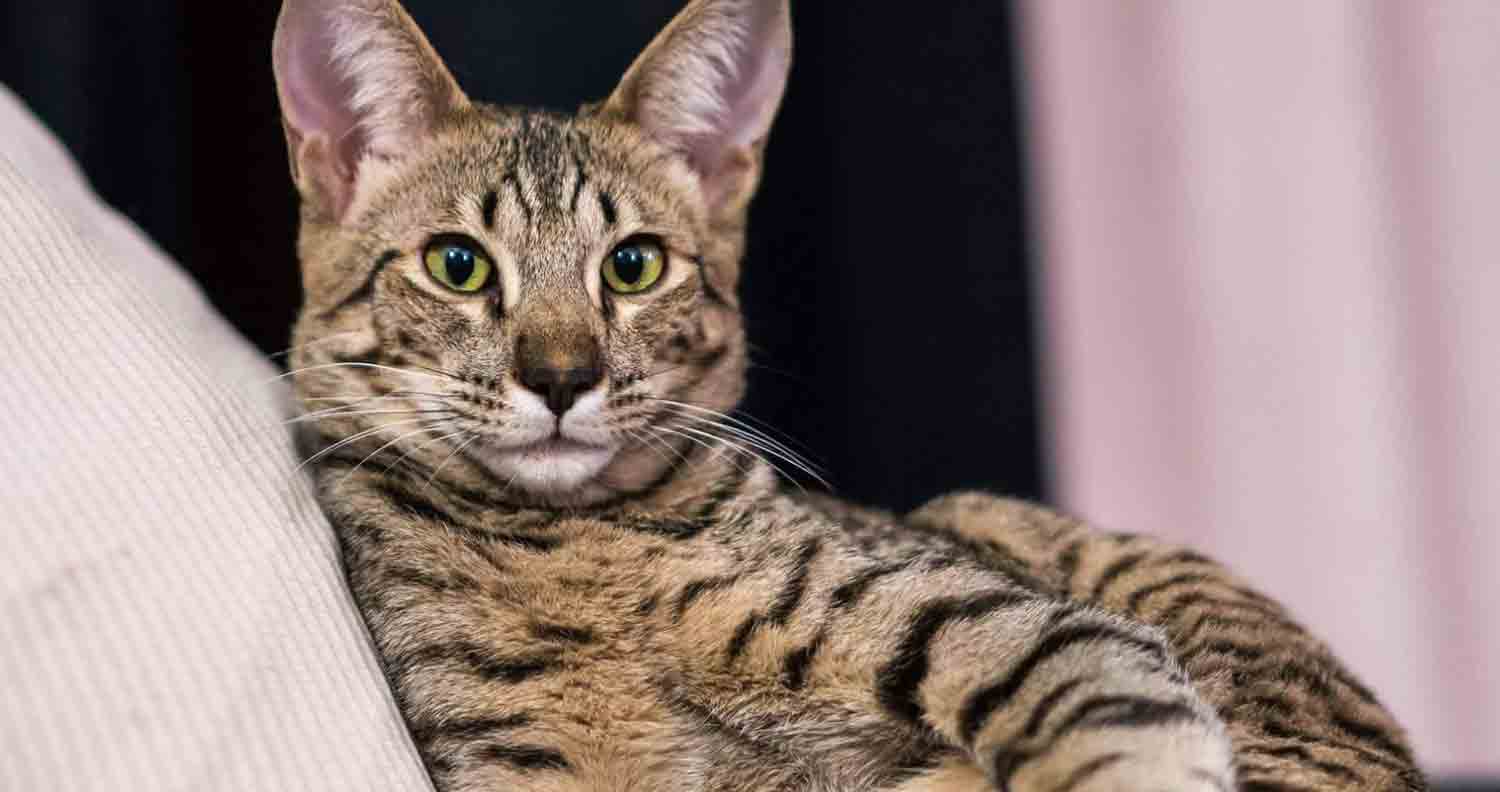 This cat heart condition can sometimes lead to heart failure, so it’s important to be very careful and aware of your cat’s health. You may also find that your male savannah cat is sterile unless you have an F6 or later.

Another point to be aware of is that your cat might get overweight if you’re not careful. They’re intelligent enough to find and eat food on their own, so be careful that they don’t binge eat.

Recommended Diets for the Savannah Cat

Savannah cats in the later “F” levels generally have the same requirements for nutrition as most domestic cat. However, earlier generations may benefit from more raw meat. You’ll need to speak to a vet and your breeder about the kind of diet that’s best for your cat.

Most vets will recommend giving your Savannah cat a taurine booster. You can find foods that have extra taurine in. Additionally, you can get supplements if you’re struggling to get your cat the right dose. Try to avoid any grain or corn in your Savannah’s dry food, as their ancestors are used to full protein diets that build their muscles.

Remember, it’s important to provide plenty of fresh, clean water for yourSavannah cat, even if he or she bats at the water and plays with the dish. 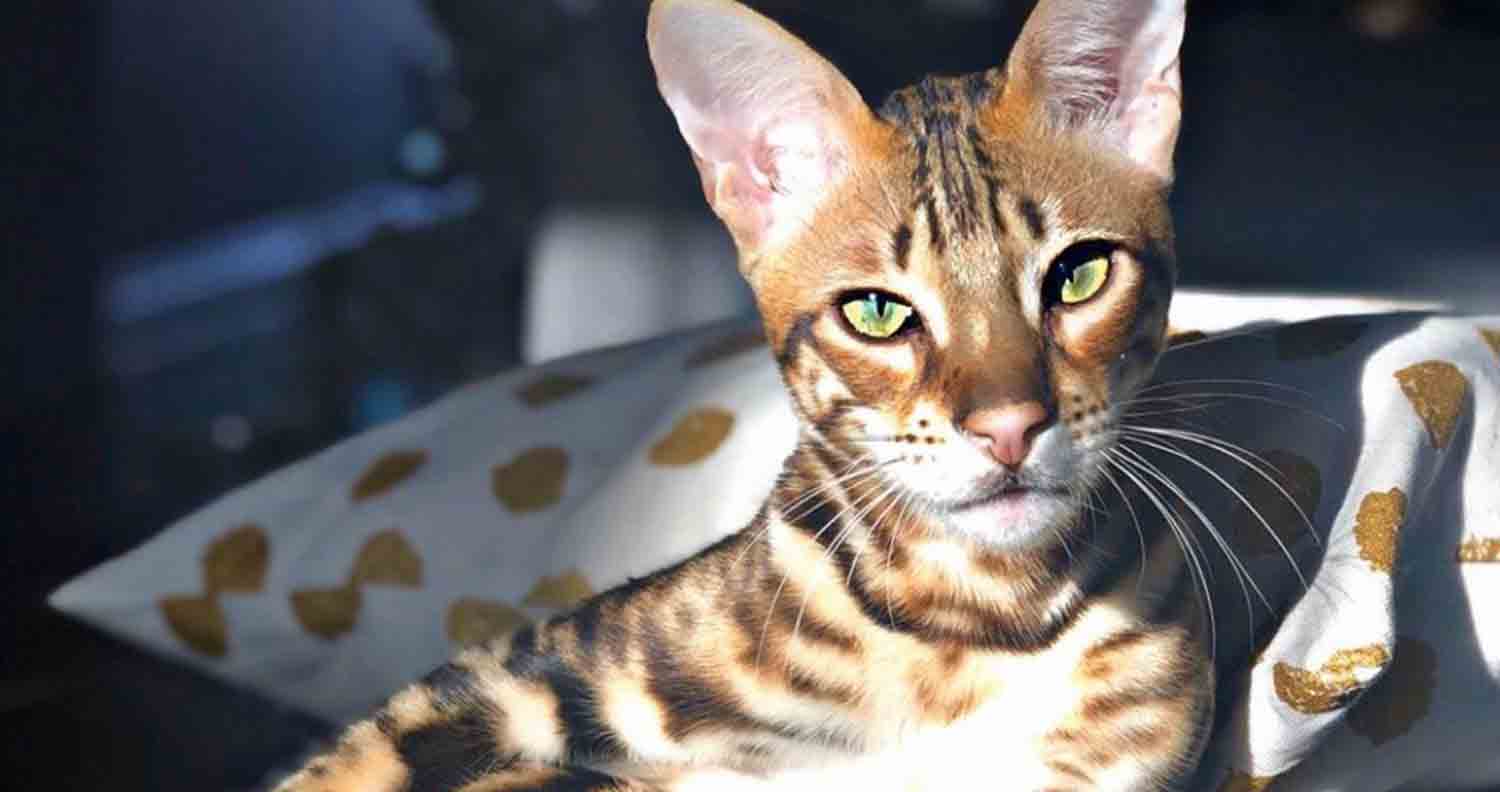 Some Helpful Facts About the Savannah Cat

Like most cats, every Savannah cat is unique, and comes with different traits. My breeder told me that the Savannah cat I bought wouldn’t be a lap cat – but that’s definitely not the case in my case. What often remains true among all Savannah’s is their high energy level and incredibly loyalty. Here are some quick facts:

I wouldn’t trade my Savannah cat for the world – but he is a lot more work than a standard cat. If you’re planning on adopting your own spotted feline, make sure you know that you can give them the right level of care and attention every day.

All Photos courtesy of Savvy-paws.com

Rebekah Carter is a dedicated animal lover. Her Savannah cat, Roscoe, has a lot of attitude, while her Maine Coon, Dukino, is full of love. When not writing, she’s looking after her cats and researching ways to help them live their best possible life. Her passion for animals and natural skill for writing led her to pursue pet blogging.