Return of the Cat Man of Aleppo

The cat man of Aleppo, Mohammad Aljaleel, touched the hearts of millions around the world in 2016 when a BBC documentary featured his cat sanctuary. 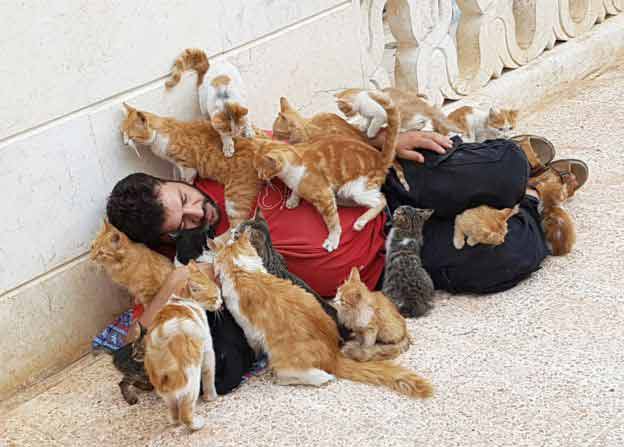 Shortly after he had to leave the city when it fell to Syrian government forces, but he’s now back and it’s not just cats he’s giving help to. 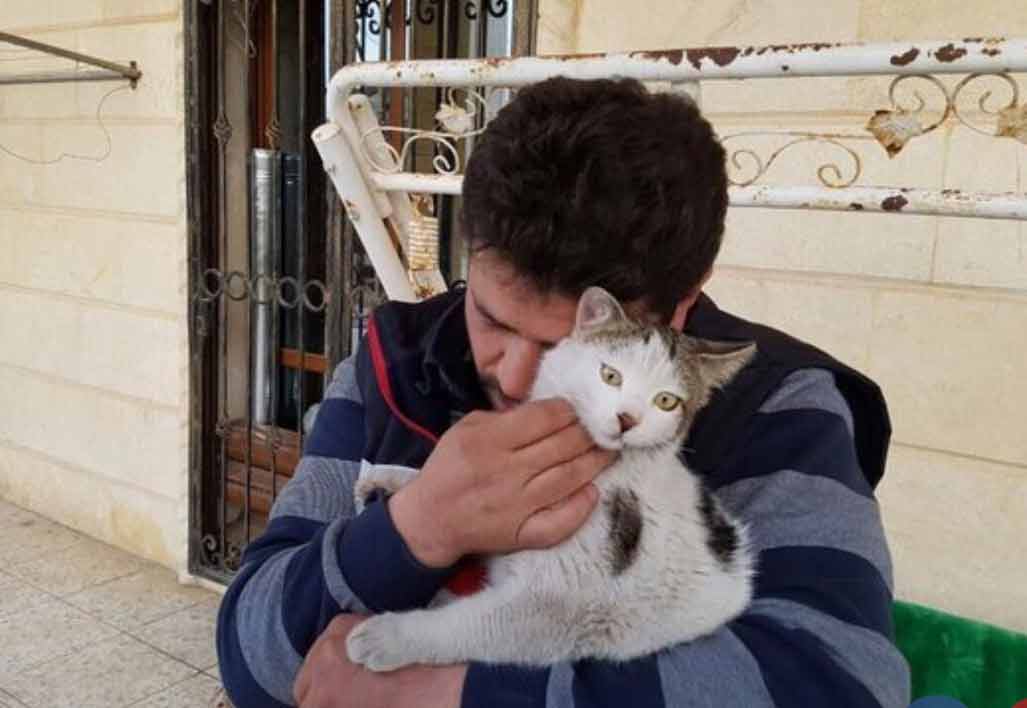 Before he left the city in 2016, Mohammad, known to everyone as Alaa, watched helplessly as his cat sanctuary was bombed and then chlorine-gassed during the intense final stages of the siege of Aleppo. Most of his 180 cats were lost or killed while he was trapped in the eastern half of the city witnessing unimaginable scenes of devastation. Yet he still managed to look after the few surviving cats and helped rescue people that were injured in the bombing. 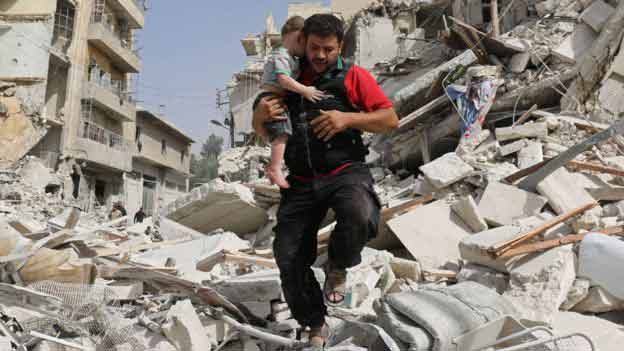 When the city finally fell in December 2016 it was time to leave, so he crammed his van with injured people and the last six cats from his sanctuary and headed out of the city in a convoy. “I’ve always felt it’s my duty and my pleasure to help people and animals whenever they need help,” said Alaa. “I believe that whoever does this will be the happiest person in the world, besides being lucky in his life.” 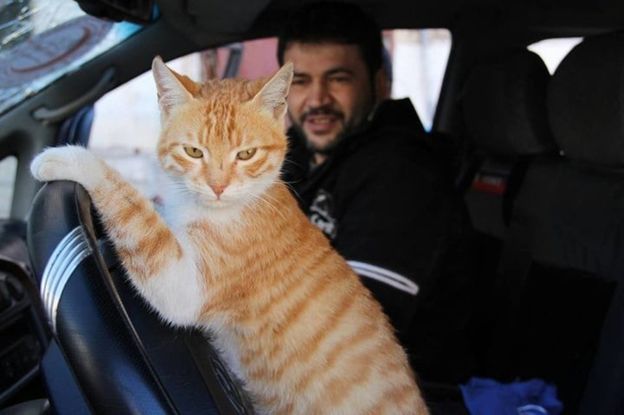 After a brief stay in Turkey, he managed to smuggle himself back into Syria. He brought a Turkish cat with him for company and started a new cat sanctuary in Kafr Naha, a village in the countryside just west of Aleppo. 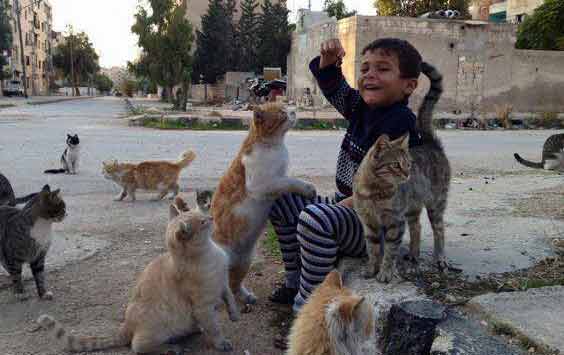 Using funds sent in by cat-lovers from all over the world via Facebook and Twitter, Alaa works for the benefit of the community as well as the cats themselves. His new sanctuary has now expanded to include an orphanage, a kindergarten and a veterinary clinic. “Children and animals are the big losers in the Syrian war,” he says. “It’s the adults who so often behave badly.” 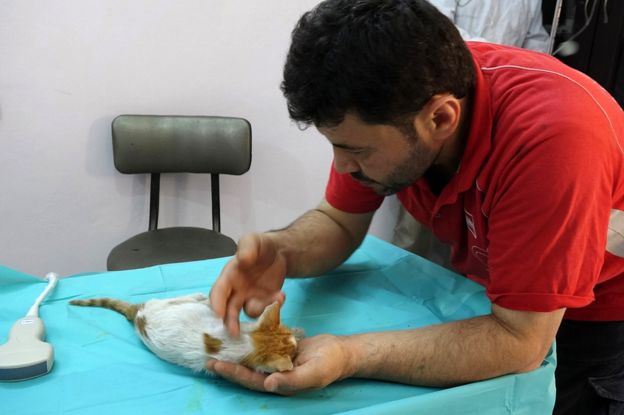 “God blessed me by putting me in a position where I could help people by being a rescue man, but in my worst nightmares I never imagined a war like this for my people or for my country, or even for a single animal.” 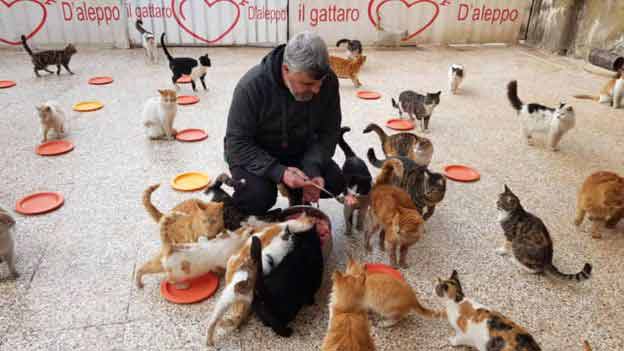 As well as cats, his new sanctuary has dogs, monkeys, rabbits, a chicken that thinks it’s a cat, and an Arabian thoroughbred horse. “There are so few thoroughbred horses left inside Syria now that I worry about finding him a mare to breed with. I plan to perform the role of a traditional Syrian mother and try to find him a wife, so that he can have children and start building up the population of thoroughbred horses in Syria again.” 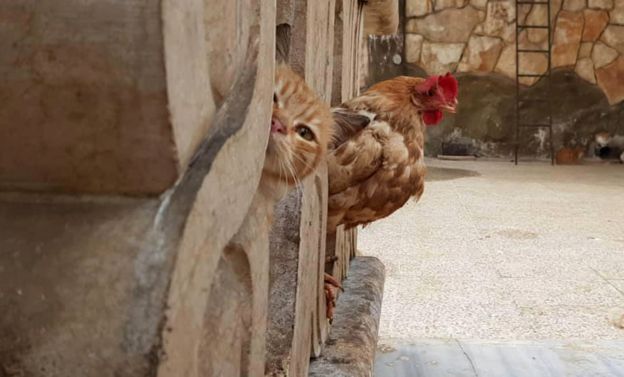 Alaa’s reputation inside Syria has travelled far and wide, and the government is well aware of his activities. “I blame all fighting parties equally – no matter who they are or why they say they’re fighting – for the killing of civilians,” Alaa says. “We are rebuilding our communities and my role in that is to rebuild my sanctuary for cats. Friendship between animals is a great thing and we should learn from them. I’ll stay with them no matter what happens. It seems the world cannot solve wars and conflicts these days. That’s why there are now so many refugees around the world, but especially here in the Middle East. I do not want to be a refugee. I want to stay in my country, in Syria. I want to help people in any way I can.” 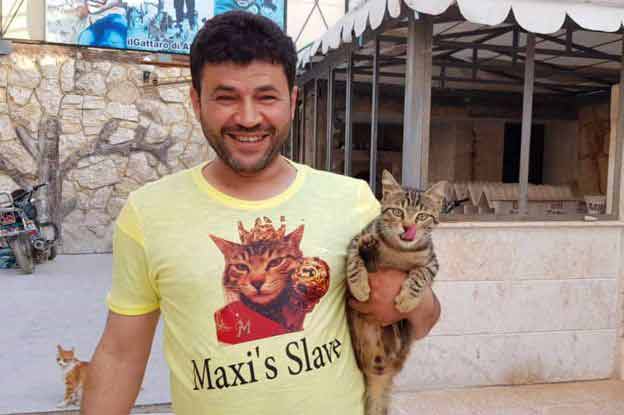 What an incredible man Alaa is, pictured here with one of the rescued cats he named Maxi, let’s hope he can continue his work helping animals and children in a country torn apart by war.