For as long as Jacqueline Santiago could remember, she had a passion for anything that had to do with caring for animals.

That was why she helped create one of Los Angeles’ most popular animal rescue shelters. Friends for Life Rescue Network worked around the clock nurturing animals who came from rough homes or were in need of medical assistance from accidents.

When Pinocchio the kitty first arrived at Los Angeles’ Friends for Life Rescue Network, workers knew that, despite his good spirits, he had a number of health issues that needed immediate assistance.

Doctors were eager to help him fully recover, but even they were caught off guard by this cat’s unheard-of transformation. 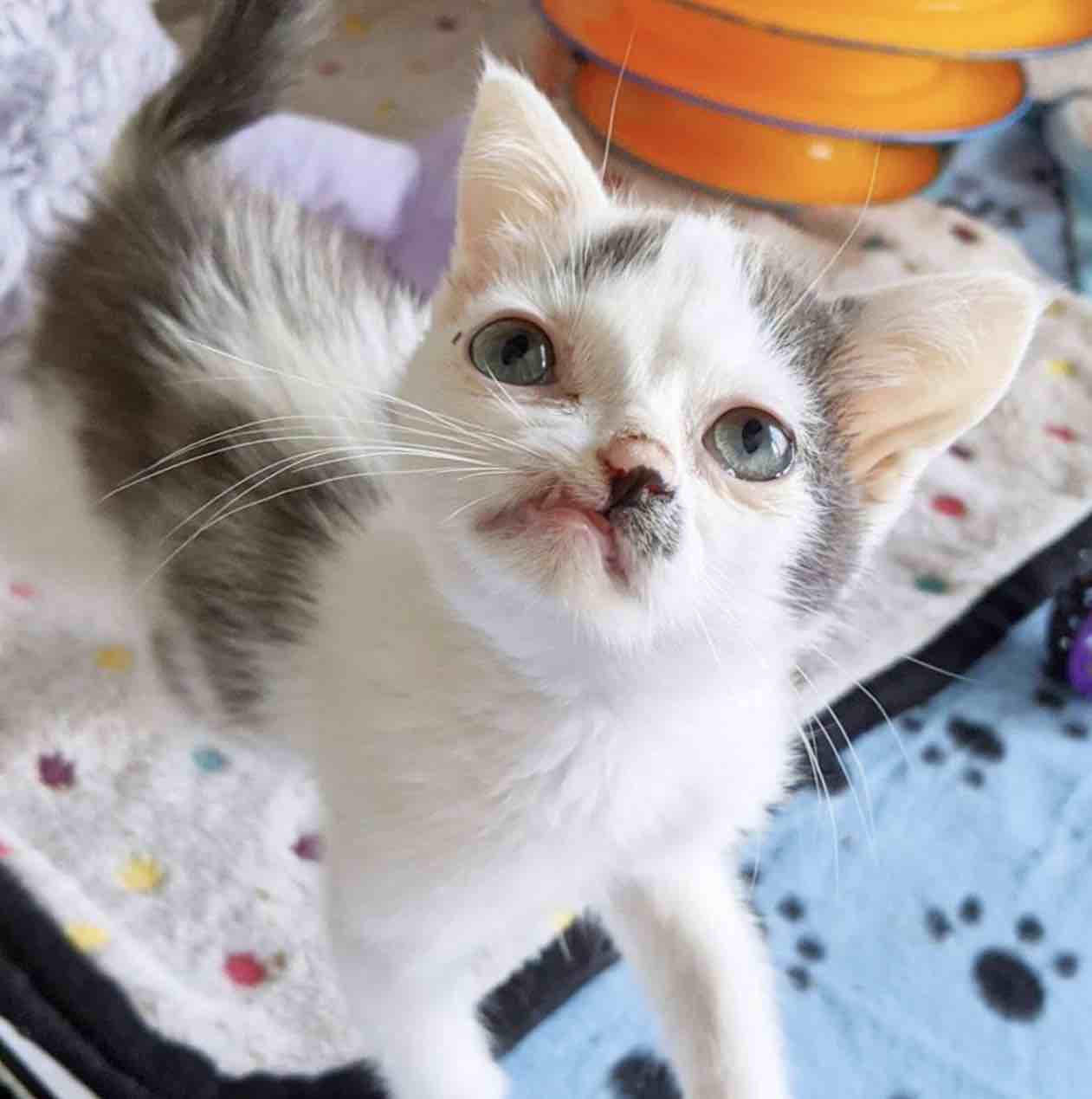 Even though Pinocchio came from a tumultuous household, he was all purrs when he arrived at the Los Angeles organization. He had many health issues he needed taken care of, and it wasn’t going to be easy.

He had a misaligned jaw bone that caused his mouth to look as if it had a sideways smirk and it was obvious to all that he hadn’t eaten for a long long time.

Upon arriving, workers gave him two full cans of food that he devoured right before nestling up in a cozy bed and getting some much needed rest. 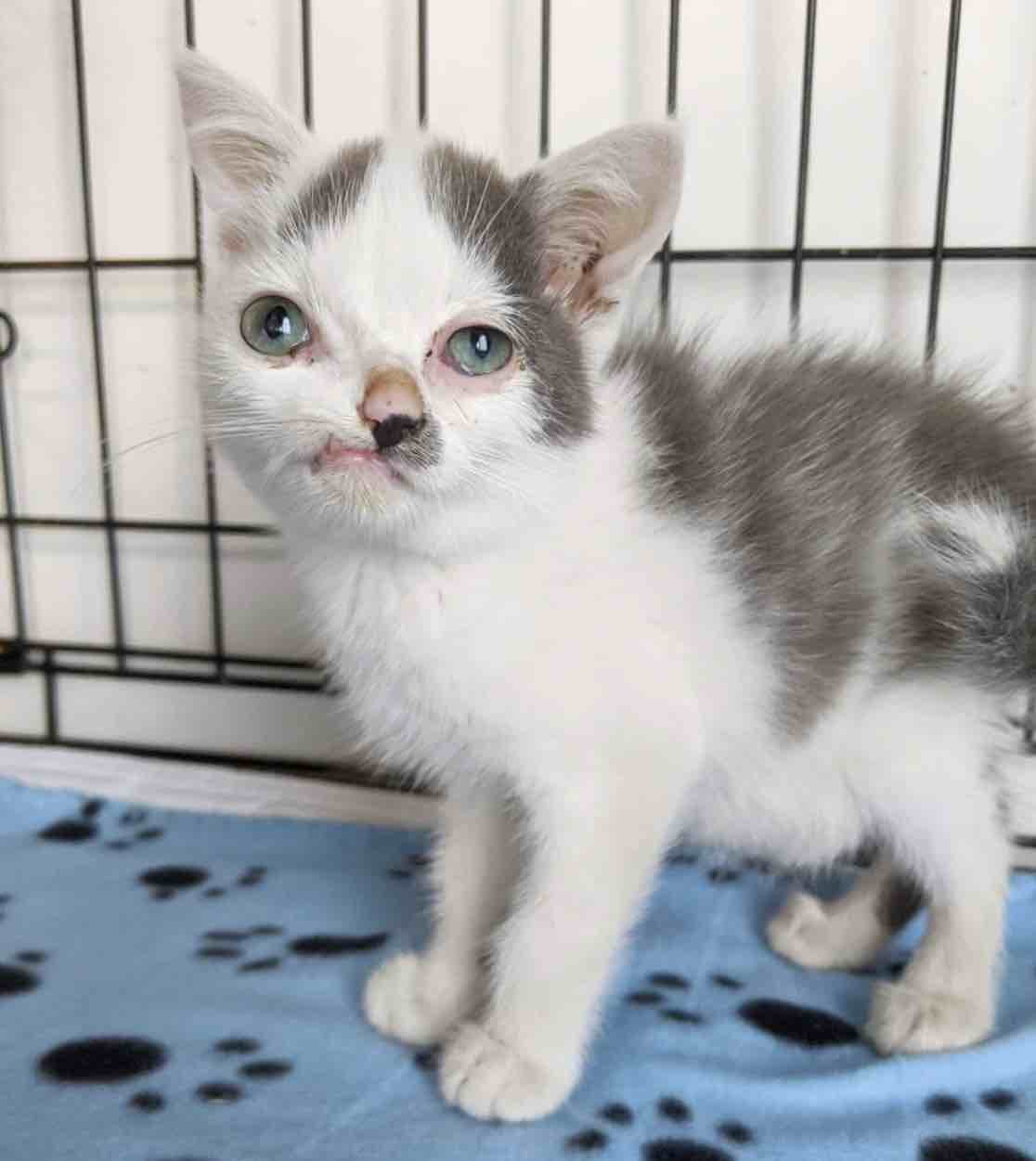 Over the course of a few days, Pinocchio was gaining more strength by the minute. He was keeping active and his muscle mass was improving.

Of course, he needed more than just strength. When the team were looking over one of Pinocchio’s pre-surgery scans they noticed that his chest shape has completely changed over the last few weeks.

This was causing his breathing to suffer. He was also fighting off a rough upper-respiratory infection and suffering from a painful umbilical hernia. 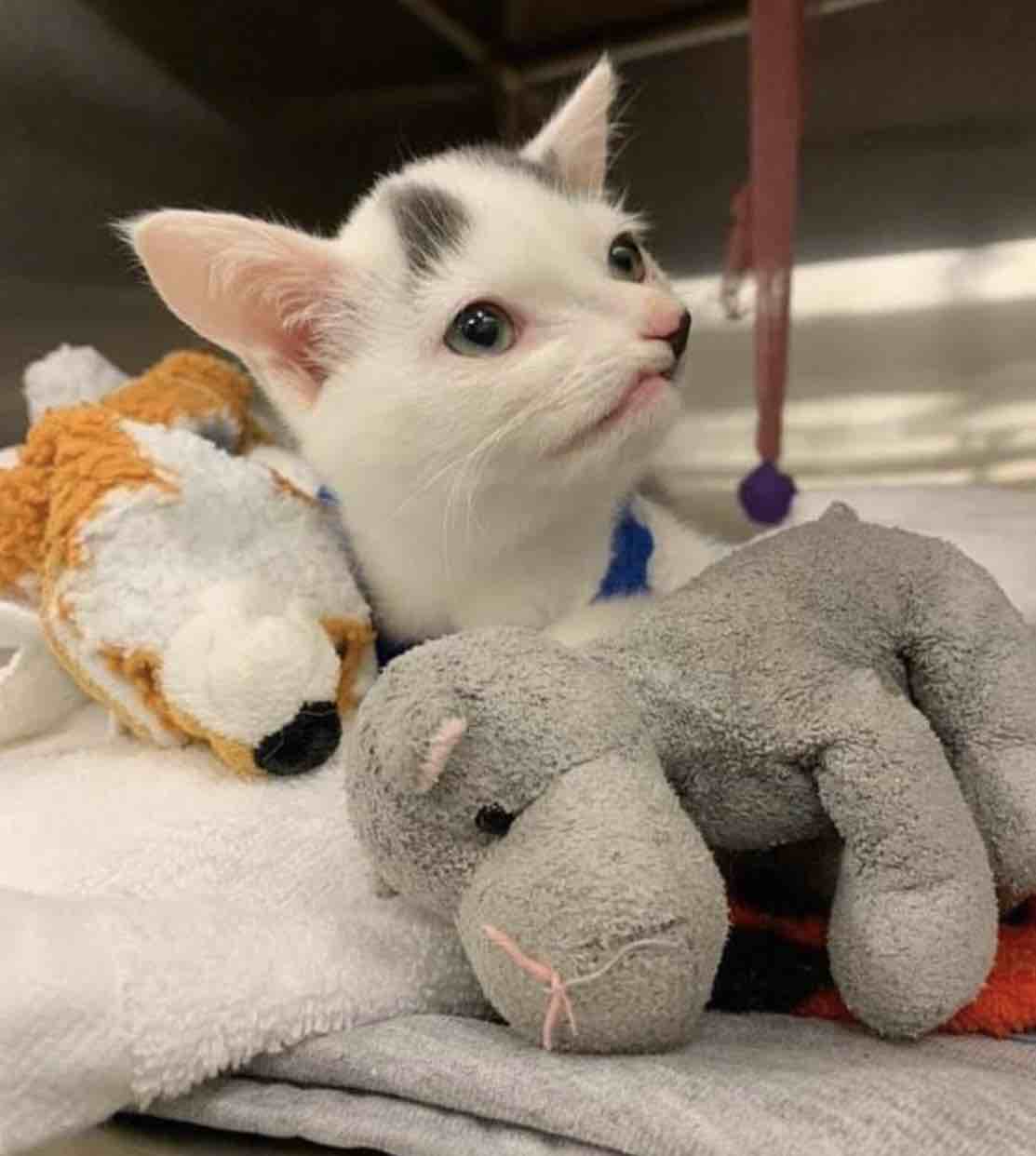 These issues required more than food and rest, the fact that Pinocchio was only three months old meant extra-delicate care was required with his brittle body. But, he was a trooper, and he came out of surgery with a new lease on life.

After the operations were over, Jacqueline and the rest of the staff visited the little guy at the Animal Speciality and Emergency Center where the surgeries took place. He responded with an army of purrs as they admired his progress.

Jacqueline said of Pinocchio after emerging from surgery, “He completely won over the entire staff team who took care of him. They said he purred so loud they couldn’t hear his heart, such a good boy.” 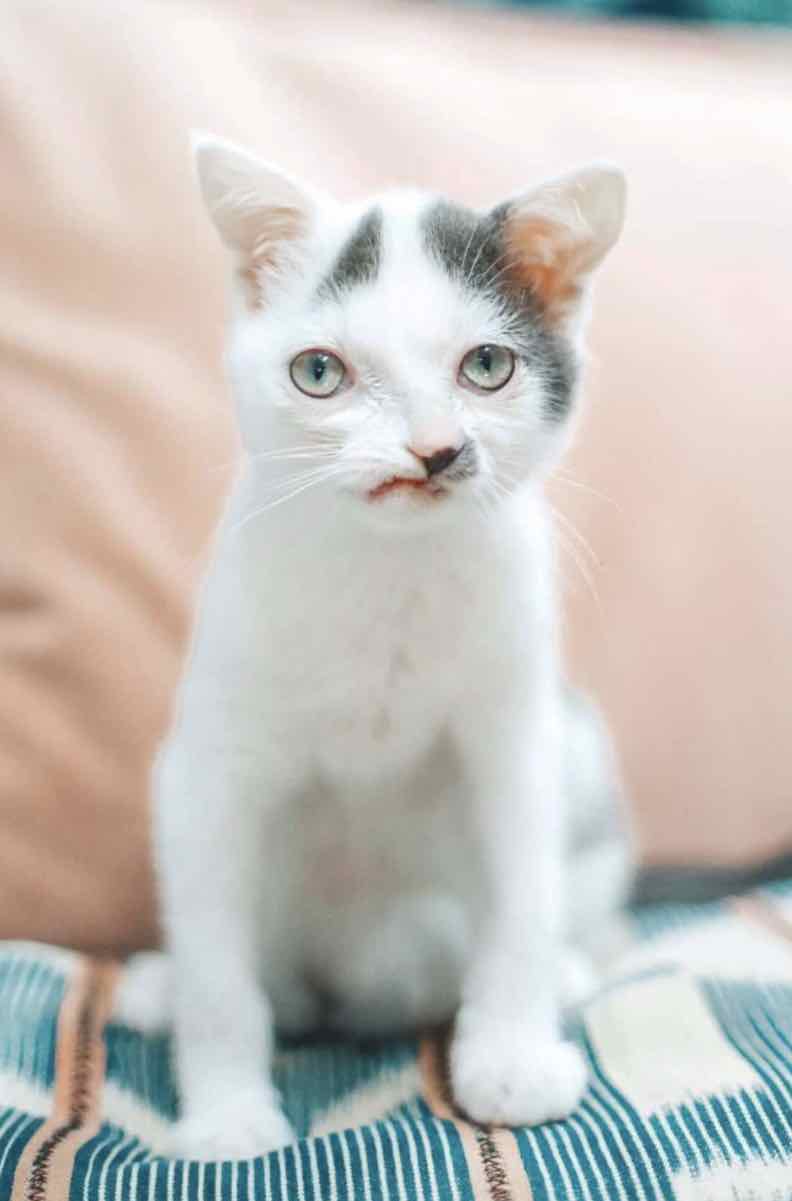 Pinocchio was eventually going to find a foster home for a permanent stay, but until that happened, Jacqueline took hime home where he was given a new bed and plush toy.

Not only was his breathing significantly smoother, but the flea issue was totally resolved, and it seemed like he was excited about life overall. “I came home yesterday to a very playful boy who wanted lots of scritches. He has been up and about and is feeling much better and getting more active every day,” said Jacqueline.

Of course, to show everyone just how far he came and how powerful he was feeling, Pinocchio donned a Superman shirt for the first several days! The guy really was like a tiny fluffy superhero. 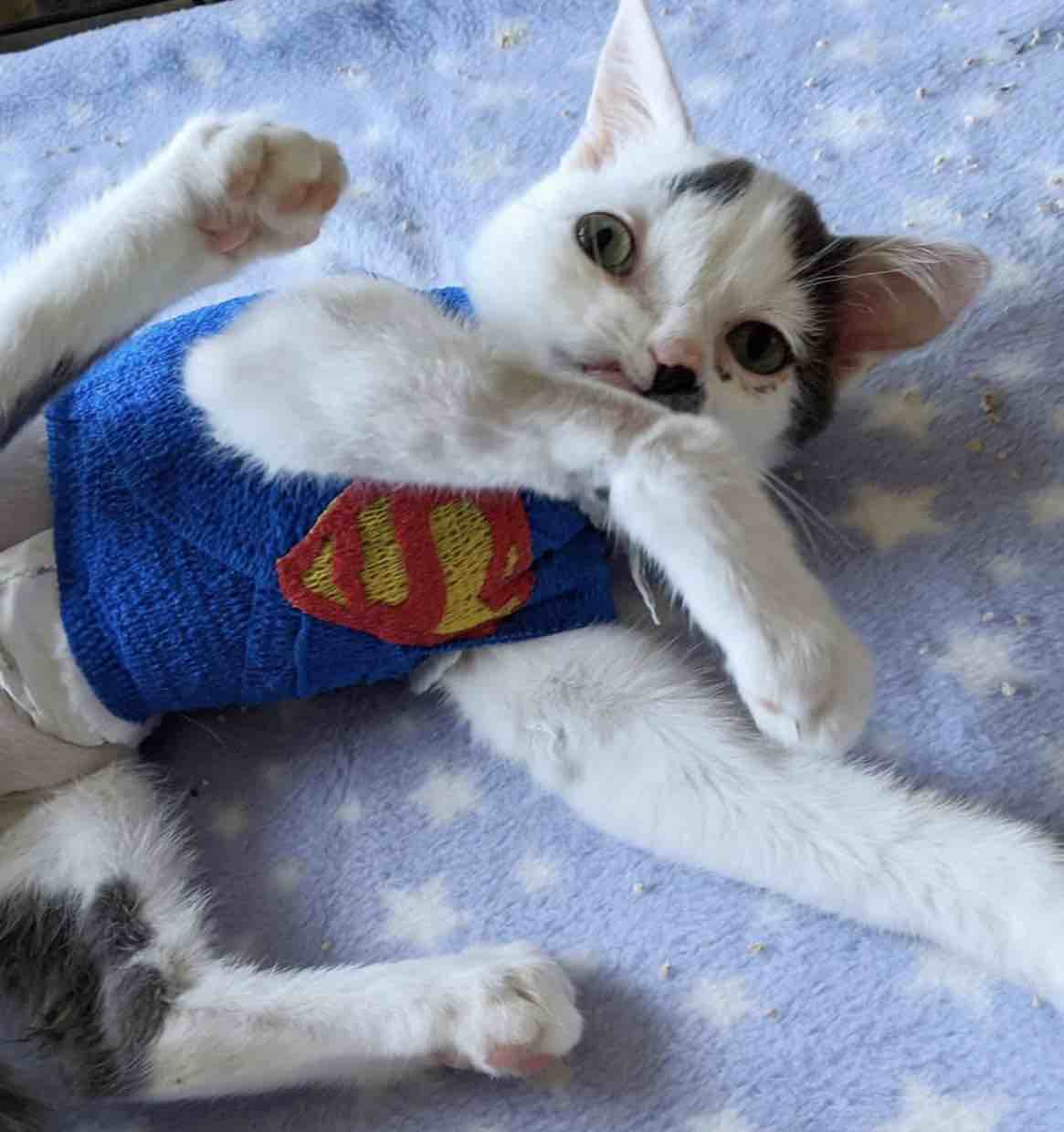 “His spirit is just as it was,” Jacqueline said. “He is a strong, playful, loving sweetheart with the biggest purrs. When he sees me, he shoots out of the bed (a little too fast) and comes right over for pets.”

Pinocchio was once a lost little kitten in need to help, and now he was living his life like a VIP! With his unique face and delightful grin, I don’t think it will take long for Pinocchio to find his forever loving home.

Click here to meet a delightful kitten with a smushed face that finds the perfect family!

Adopted Shelter Cat Joins Couple on Their Adventures as Their ‘Sweetheart’!

Adopted Shelter Cat Joins Couple on Their Adventures as Their ‘Sweetheart’!

Abandoned at 17 – A New Beginning for a Senior Cat

Abandoned at 17 – A New Beginning for a Senior Cat