Animal adoption is never an easy decision and should never be made lightly, it requires a lot of responsibility.

We see so many neglected kittens that have been abandoned in the streets and need our help, but recent trends have shown us that adoption from shelters is on the rise and less people are heading to breeders to find their family cat.

It has been estimated that every year, a staggering 3.2 million shelter animals find new homes and at least 1.6 million of these are cats and kittens.

And the most important part is that pet euthanasia has plummeted in big American cities, falling by more than 75 percent since 2009. This is good news all round.

There is proof of this on Reddit, where people are sharing their stories of pet adoption along with pictures showing what their new family member looked like when they were adopted and what they look like now.

These 18 before-and-after photographs perfectly illustrate the amazing transformations these abandoned animals have gone through, and we see first hand what a bit of love and attention can do to change a life forever.

1. This Is Barley! My Son And I Found Her By The Road. She Had Been Abandoned. So Thin… Covered In Fleas. The Last Photo Was 3 Months After We Found Her. She’s Simply The Sweetest Little Cat Ever 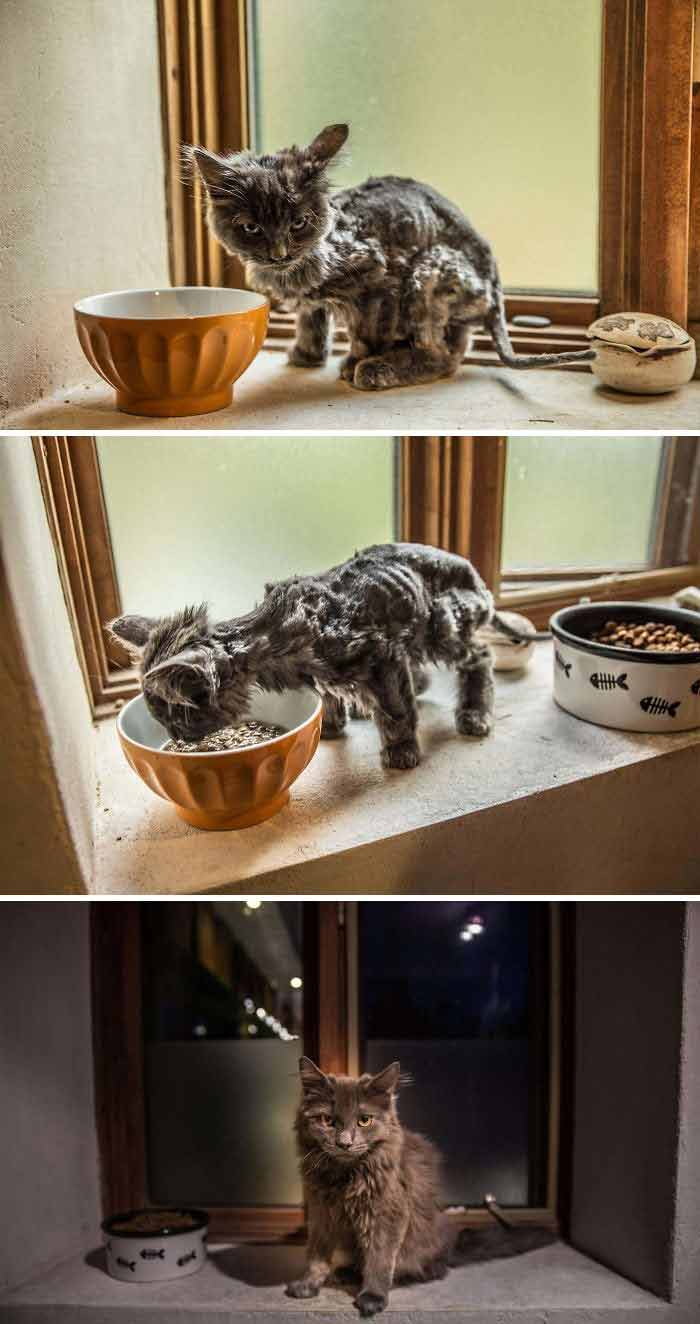 2. My Boy Yuzu Was A Stray Found By A Friend Of Mine With The Worst Case Of Scabies We’ve Ever Seen (We’re All Vet Students). He’s Also Had Ear Mites, Fungal Infections, Stud Tail, & Recurrent Ear And Eye Infections One After The Other. One Year And Lots Of Treatments Later And He’s Perfectly Healthy! 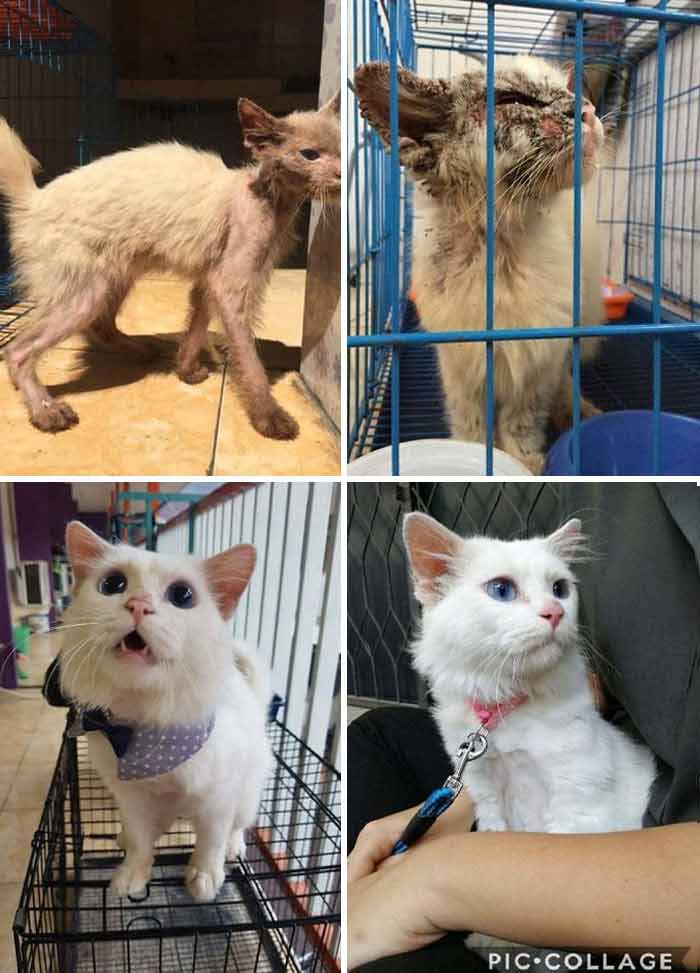 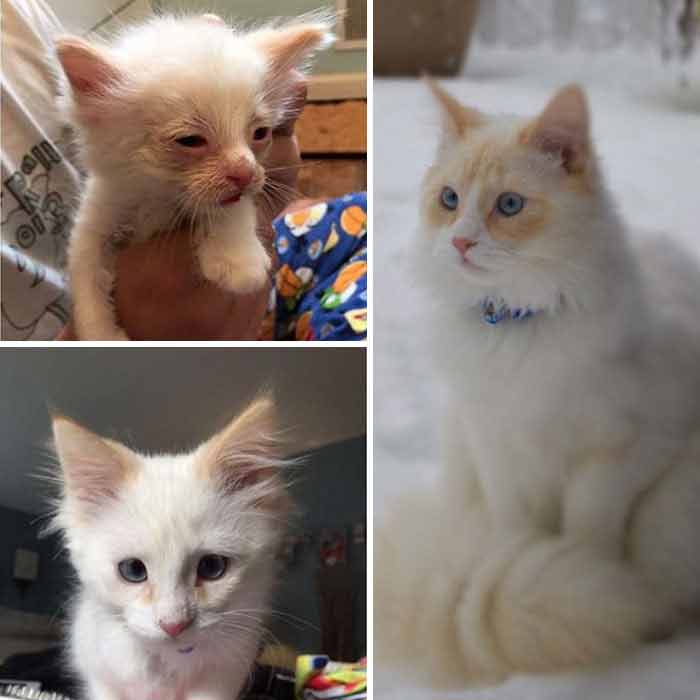 4. Kai Mana Had His Jaw Stepped On And Would Be Put Down. I Worked Full Time And Couldn’t Commit To Taking Care Of Him. But My BF Took Him To Get Surgery, And Fed Him Kitten Formula Through A Syringe. He Brought Him To His Construction Job, And Woke Up Every Two Hours For Feedings. He’s Happy Today 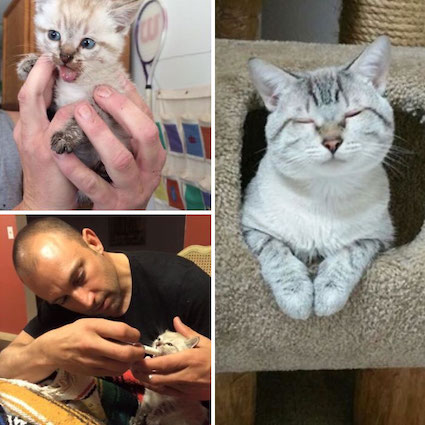 5. One Month Ago, I Found This Baby In The Wheel Of My Forklift At Work. Now She Lives At Home With Me. Meet Emmy (6 Weeks vs. 10 Weeks) 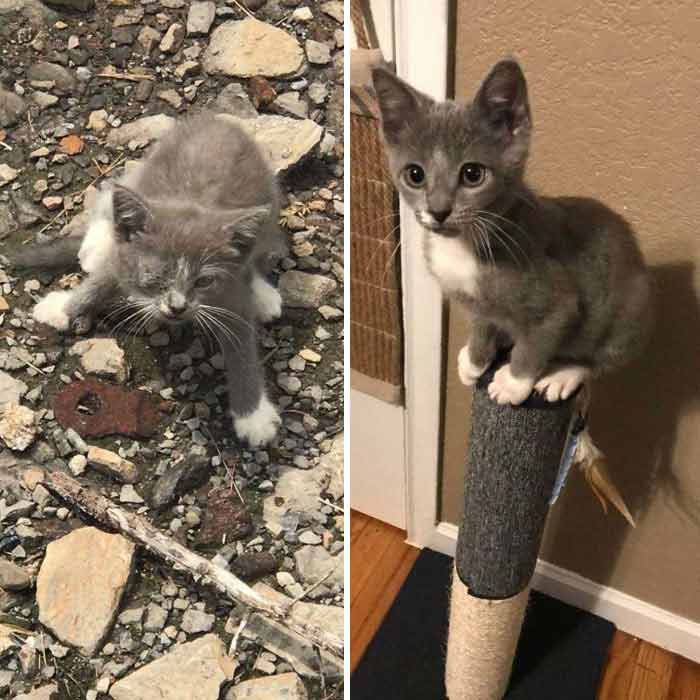 6. This Is Benben. Before/After Death Row 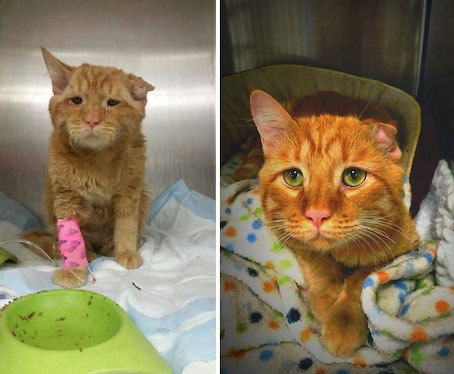 7. Phoenix Was Rescued From The Streets And Was Covered In Hot Tar. Little Over A Month Later, He Looks Amazing, He Loves Humans And Is Ready To Enter A Loving Home 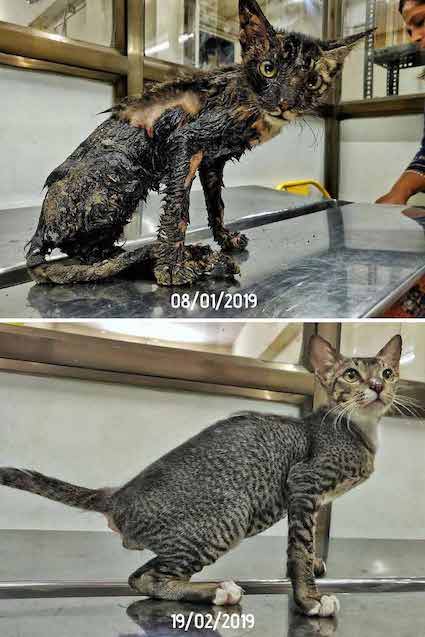 8. Kira Was Founded Almost Dead Of Starvation In A Farm With Cows. She Was Healthy In One Week And We Kept Her. Summer 2018 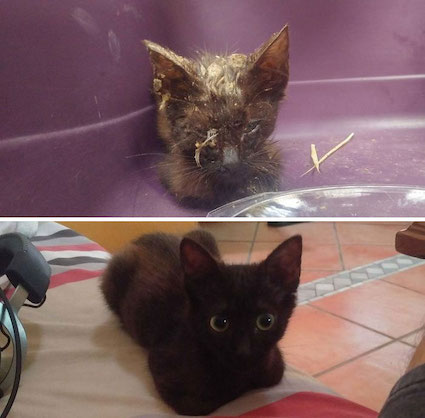 9. 2 Years Ago Today I Walked Into A Petsmart And Met A Cat Named Sonny Who No One Would Adopt Because He Was 13 Years Old, Covered In Fleas, Underweight, And Had A Mouth Full Of Rotten Teeth That Had To Be Removed. He Came Home With Me That Night And It Was The Best Decision I’ve Ever Made 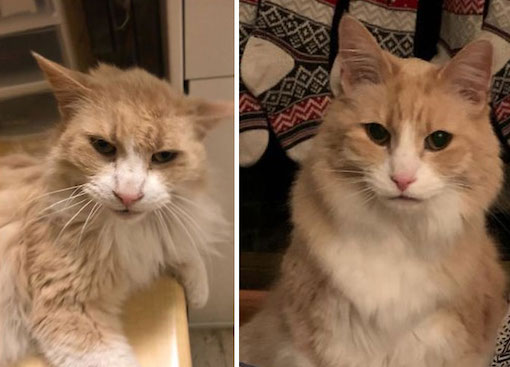 10.  Our Sweet Cousteau! From A Scrawny Street Kitty In New Orleans To A Prince Living In Paris 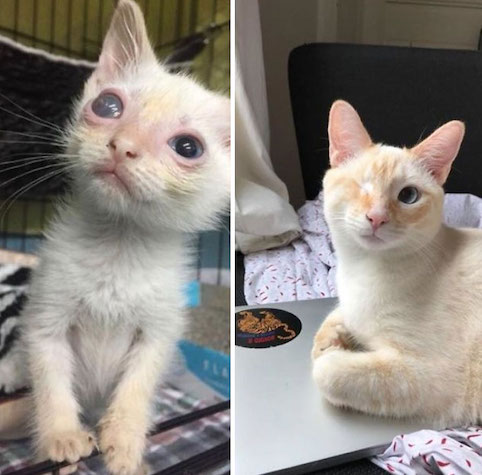 11. Before And After Fostering. Roadrunner On The Day I Got Him From The Shelter, And On The Day He Went To His New Home 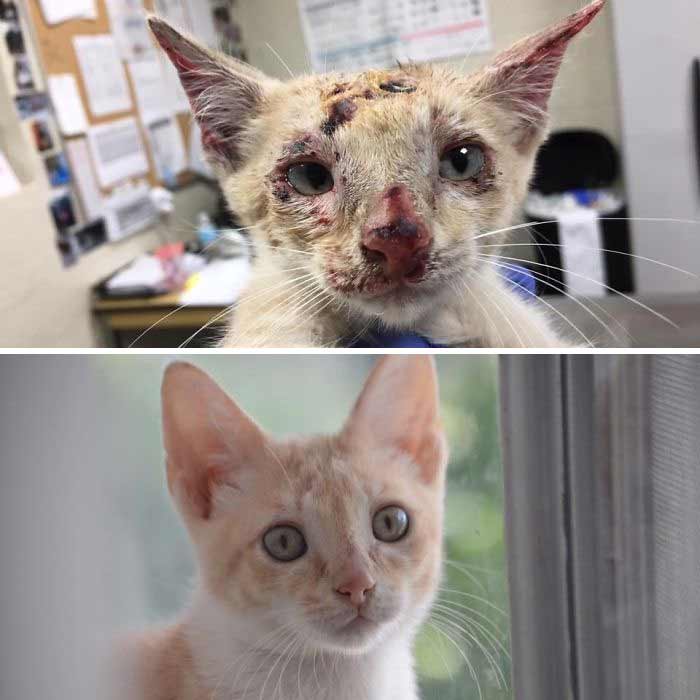 12. Albus Was Found Abandoned And Starving On The Streets Of Cairo. The Strays Wouldn’t Let Him Eat. He’s Now Spoilt Rotten And Incredibly Affectionate

13. These Two Cat Brothers Were Rescued From The Street And They Are As Inseparable Today As They Were The Day I Found Them 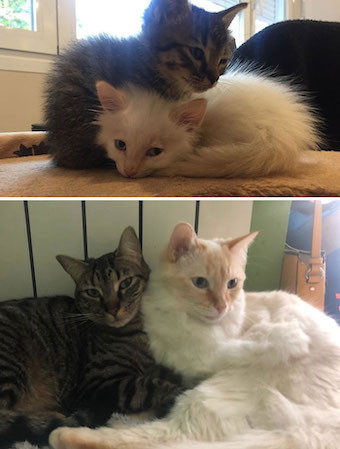 14. One Year Ago, Jake Was Found Underneath A Car, Alone And Half Frozen. He Was 4 Weeks Old And His Mom Was Gone. Now He’s The Biggest Kitty With The Most Personality That I’ve Ever Met 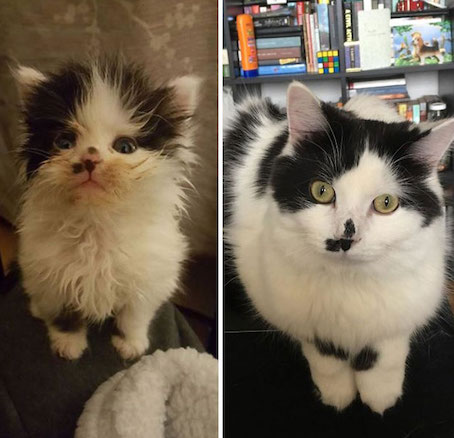 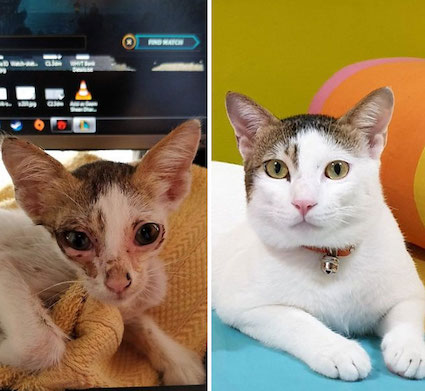 16. I Rescued The Cat Off The Street. Photos Before And After. One Month Difference. 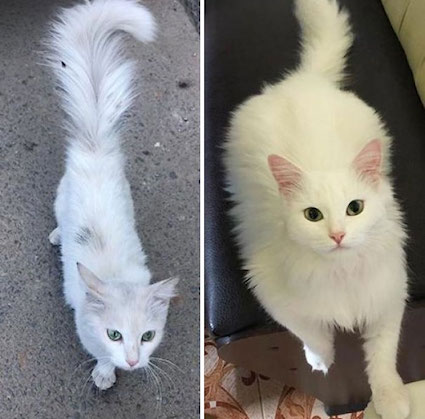 17. From Feral To Friend (Harry’s Story). Last January, We Received Word That There A Was A Feral Cat Found With A Terrible Head Wound. He Was On Death’s Doorstep. We Took Him In To Recover And 8 Months Later He Won’t Leave Our Side 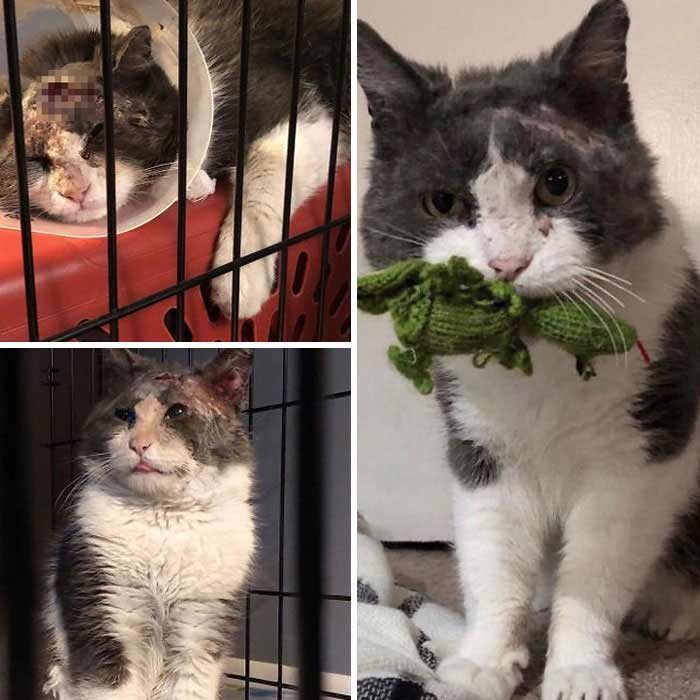 18. Some Wonderful Soul Found This Little Guy On The Street Cuddled Up In A Plastic Container. 3 Years Later, He Is The Happiest, Sweetest, Most Playful, Curious Cat. Love Him So Much And Thank You Wonderful Soul, Whomever You Are 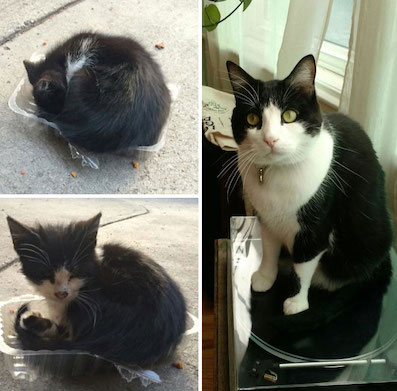 After street cats are rescued and placed in loving forever homes, the change in them is almost instant. Many people believe that adopting a cat is one of the best decisions of their life.

You can see more of these amazing transformations on Reddit

35 Hilarious Cat Snaps that Show Life with Cats is Amazing

35 Hilarious Cat Snaps that Show Life with Cats is Amazing