The Nevada Northern Railway is an old relic preserved in time that brings tourists from all over to the see to the trains and cars that are housed there. But they are not the only tourist attraction in the area.

Wandering around the East Ely Railroad Depot Museum is Dirt the Railway Cat and he has now become one of the mascots of Nevada. 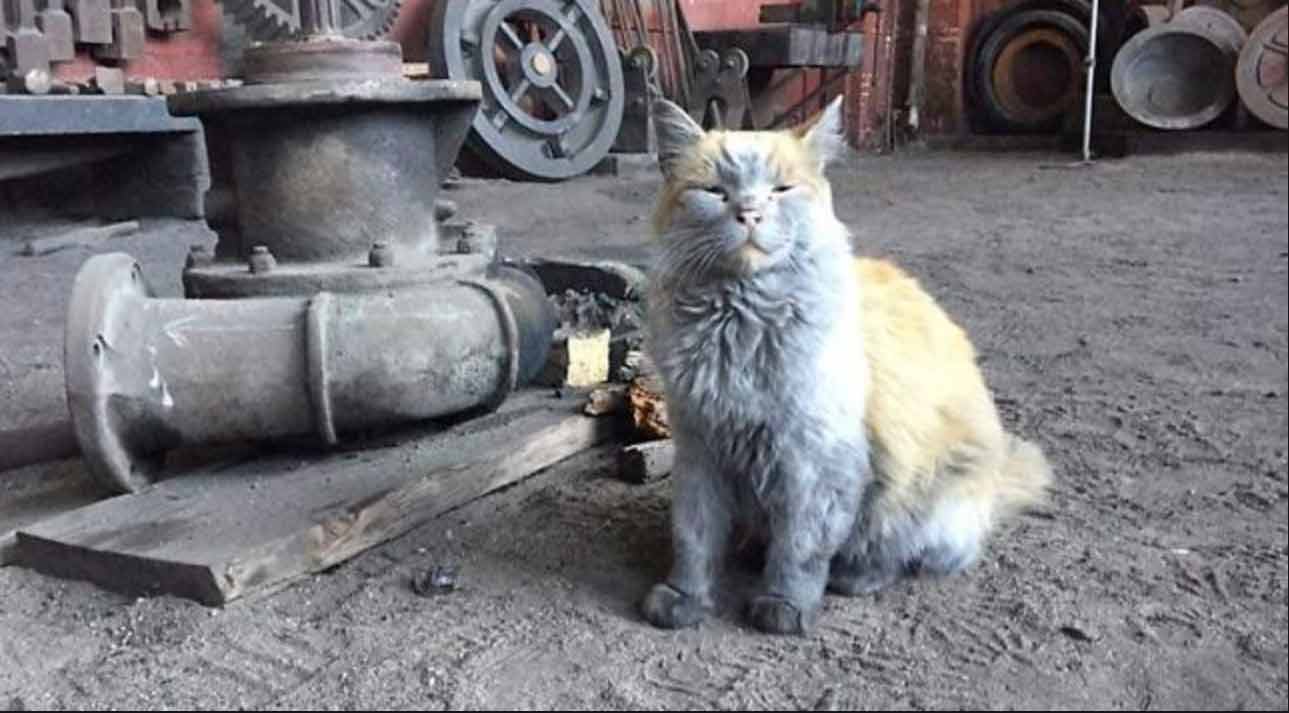 Dirt has very distinct markings, he looks as if he’s been working all day on a locomotive, covered in coal. 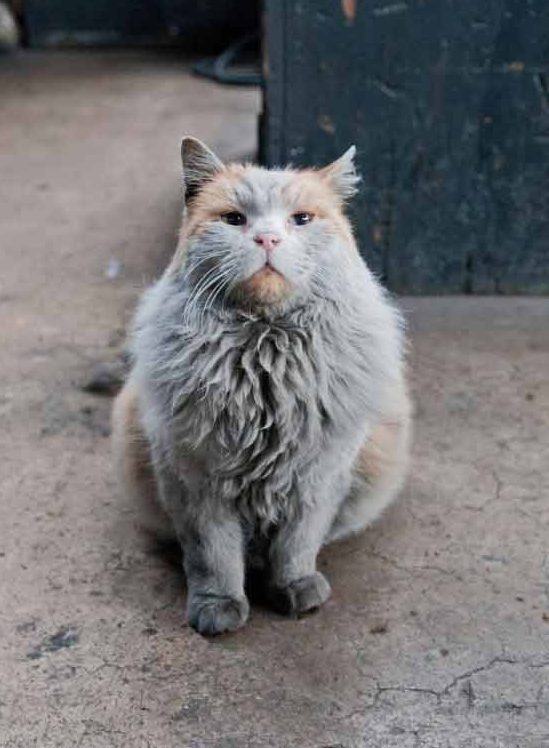 Eric Mencis, the manager of guest services and social media director explains Dirt’s role: “As tours walk through the building people are just amazed about hearing the history and the stories of the railroad.”

“Then as if he knew it was his cue to appear Dirt just walks into the room where the tour is, or out from under one of the trains and sits in the middle of the group with a sense of pride that only he can have.” 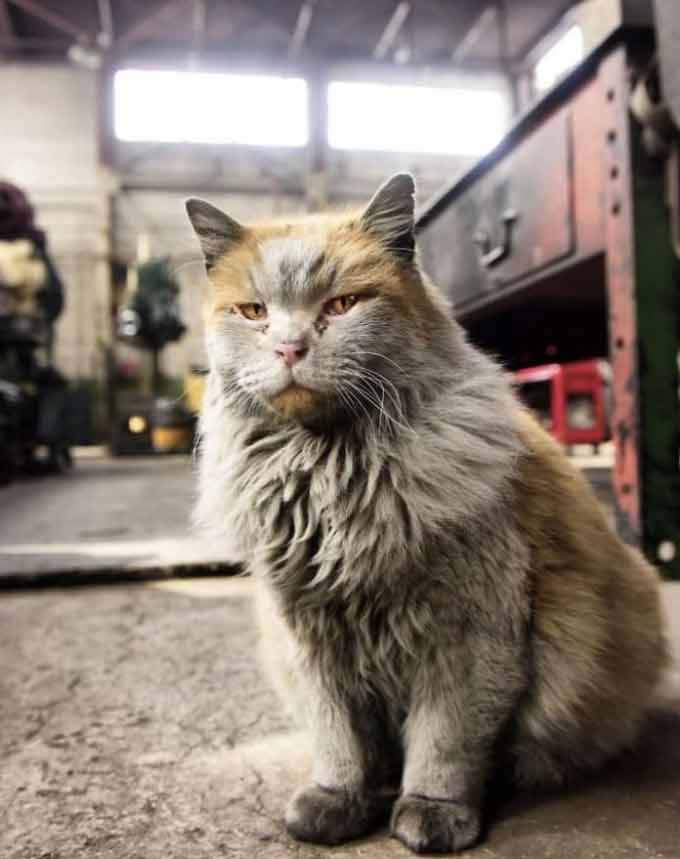 The engine house of the East Ely Railroad is the only home Dirt has ever known. 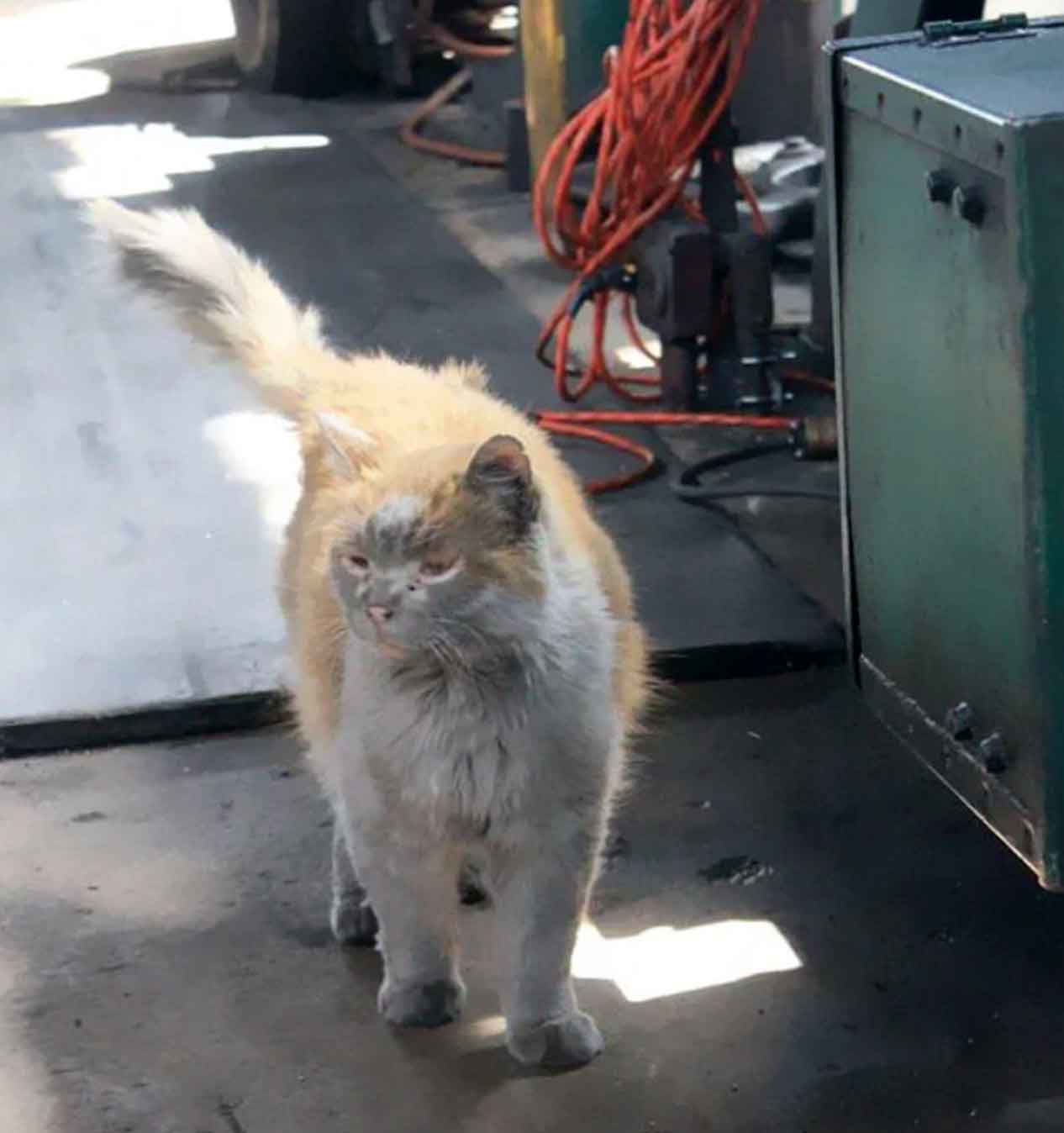 He was born there 11-years ago to a stray that wandered in. “She had her kittens under one of our trains, a 1907 built rotary snow plow to be exact. A Rotary Snow Plow is a huge steam-powered train snowblower.

Mom and the other kittens left and this one stray was all alone but scared to come out. So our train crews would leave a can of tuna on a chair every night for this kitten, eventually, the kitten came out friendly up to the crews,” explains Eric. 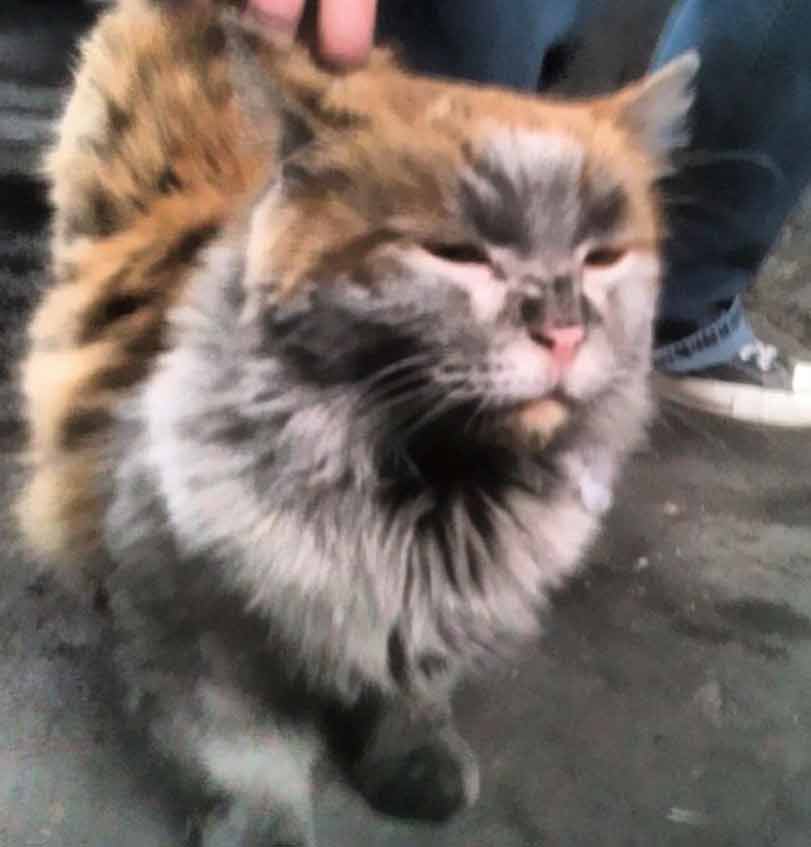 “Dirt is actually an orange and white cat, but because at a young age he started rolling in the dirt and climbing on the trains, his white fur gets stained gray,” said Eric.

“At a young age, Dirt learned not to lick himself clean, like normal cats, being part stray he likes to stay oily and dirty because it helps keep him tough looking and also in a sense keeps him clean because things don’t stick to his fur and bugs don’t go near him.” 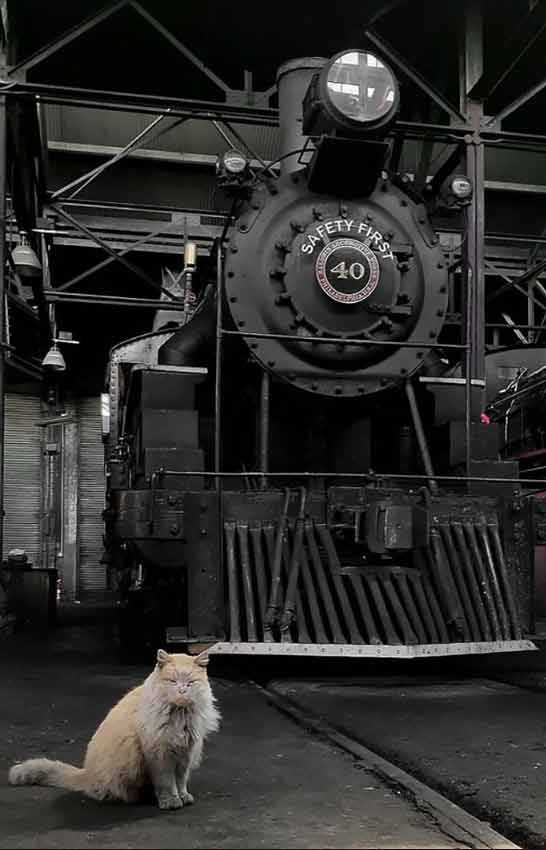 “It took rough and tough men 100 years ago to move millions of tons of rock by rail to get melted down and make copper that provided electricity to the world. You look at old pictures of those men, and you can just tell in their eyes they have stories to tell. When you look into Dirt’s eyes, he has that same look.” 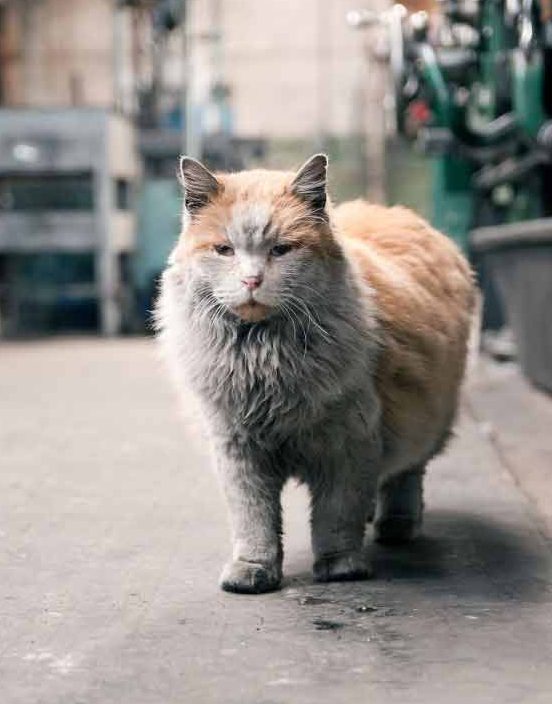 “Dirt is pretty much one of those old-time railroaders living now as a cat. Dirt walks around the shop like he’s the boss making sure everything is working right. The type of boss that started at the bottom and worked his way up the ladder, the type who knows how hard and tough the job is but has faith that his men can get it done.”

“He walks with a sense of pride around his engine house as if these are his trains and he is proud of the men that keep them going. He will climb on and walk around the trains, like he is inspecting them, checking to make sure not a bolt is loose or that the bearings are properly oiled up,” described Eric. 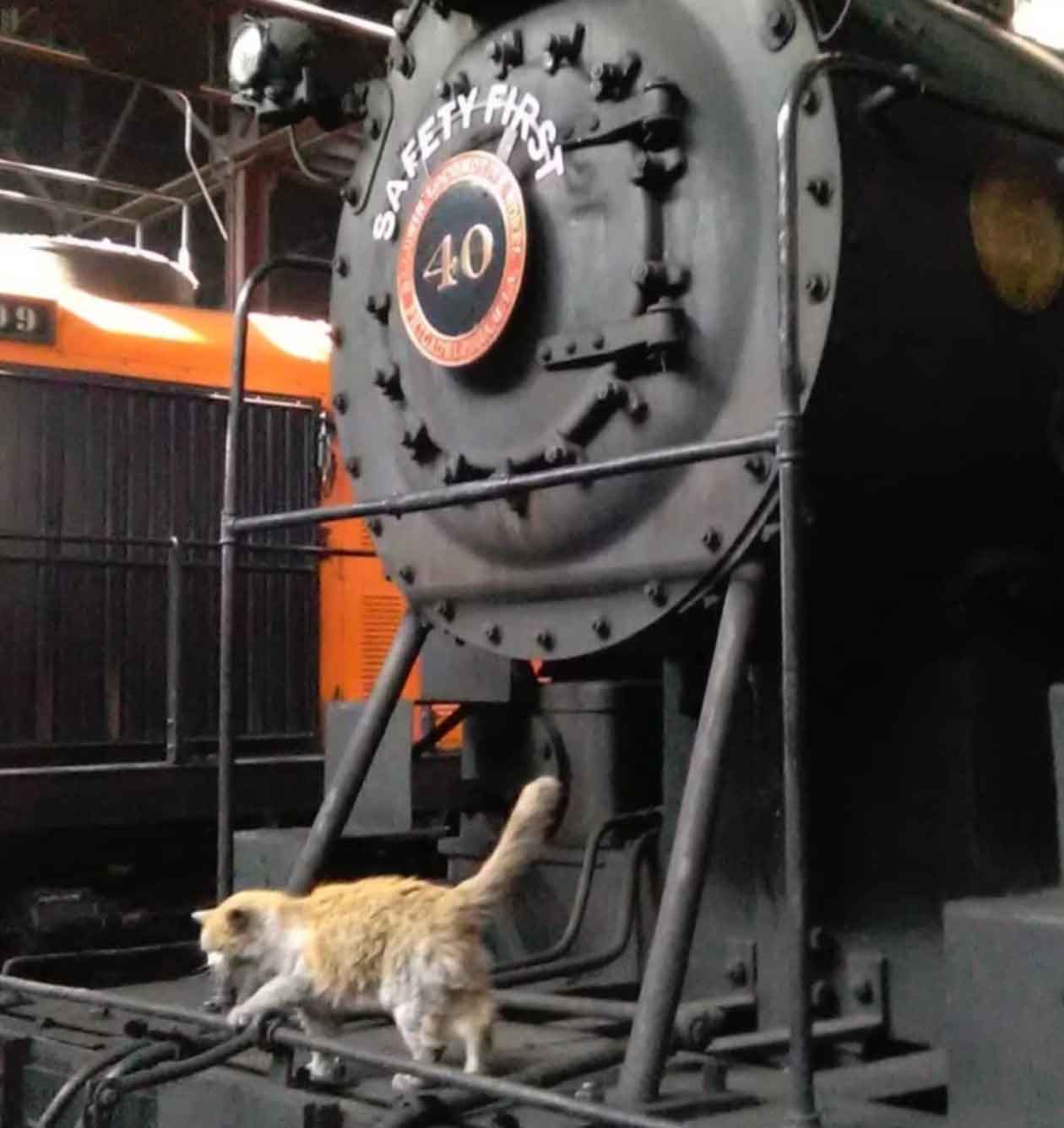 People love to hear the history of the railway but Dirt always steals the show with his celebrity attitude, he poses for photos, rubs against visitors legs and allows them to pet him. 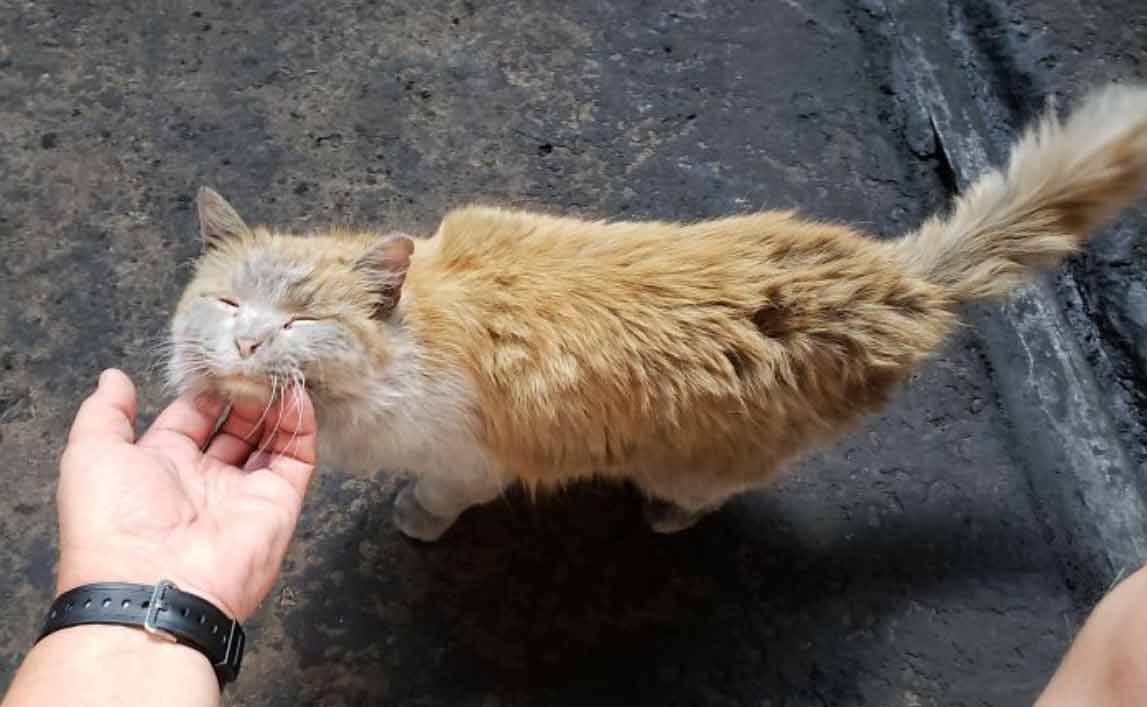 He may look like old tough railroader on the outside but inside he’s a total sweetheart. 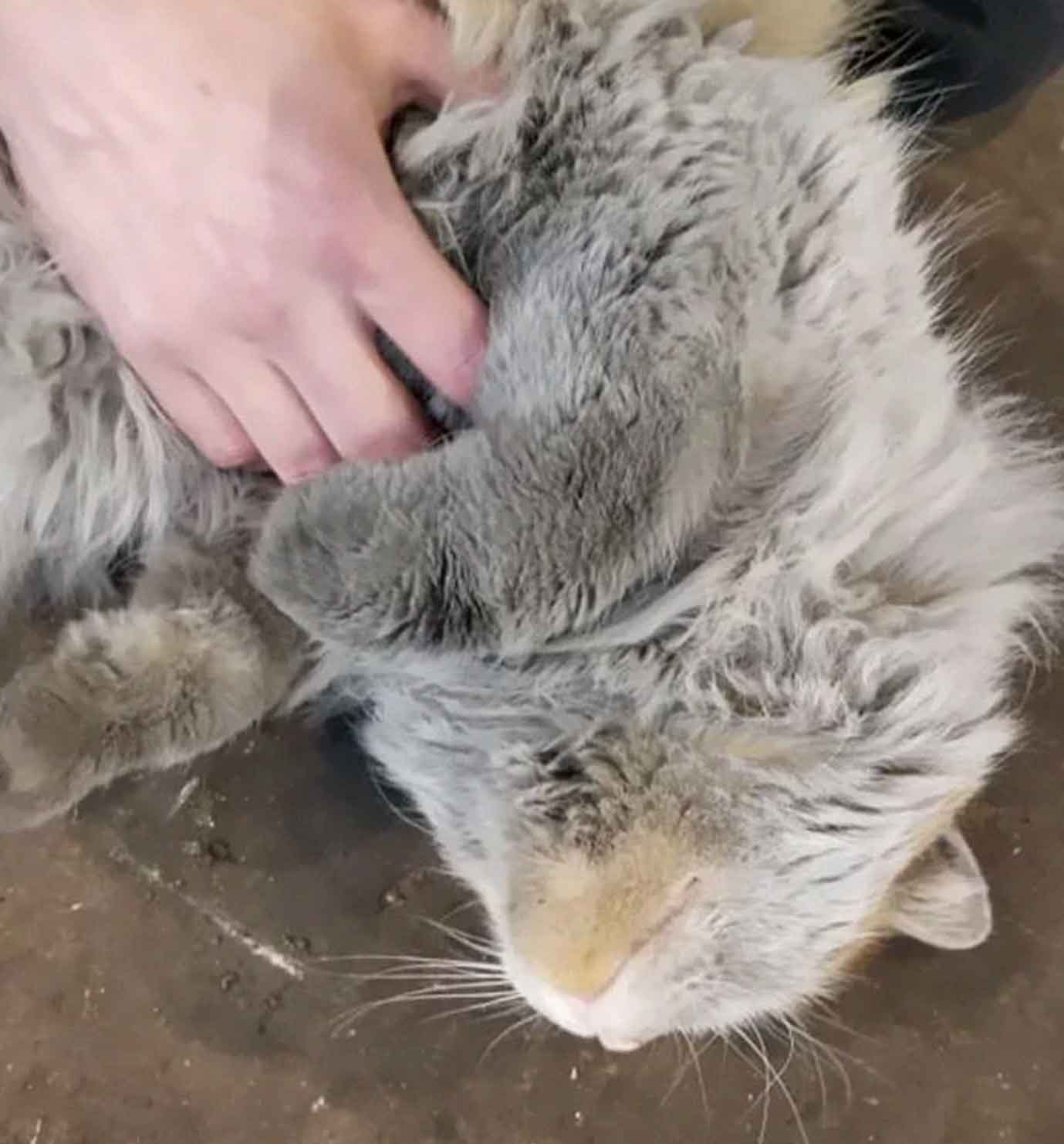 “Dirt had kittens years ago, and most were also orange and white and got just as dirty as Dirt. Most didn’t have the sense of how to live around the trains so we rehomed them, with many of our train crews and volunteers adopting them and taking them home.”

“One of Dirt’s kittens lived in the engine house for about 7 years but just over a year ago found a better home. Dirt has gotten fixed since then.” 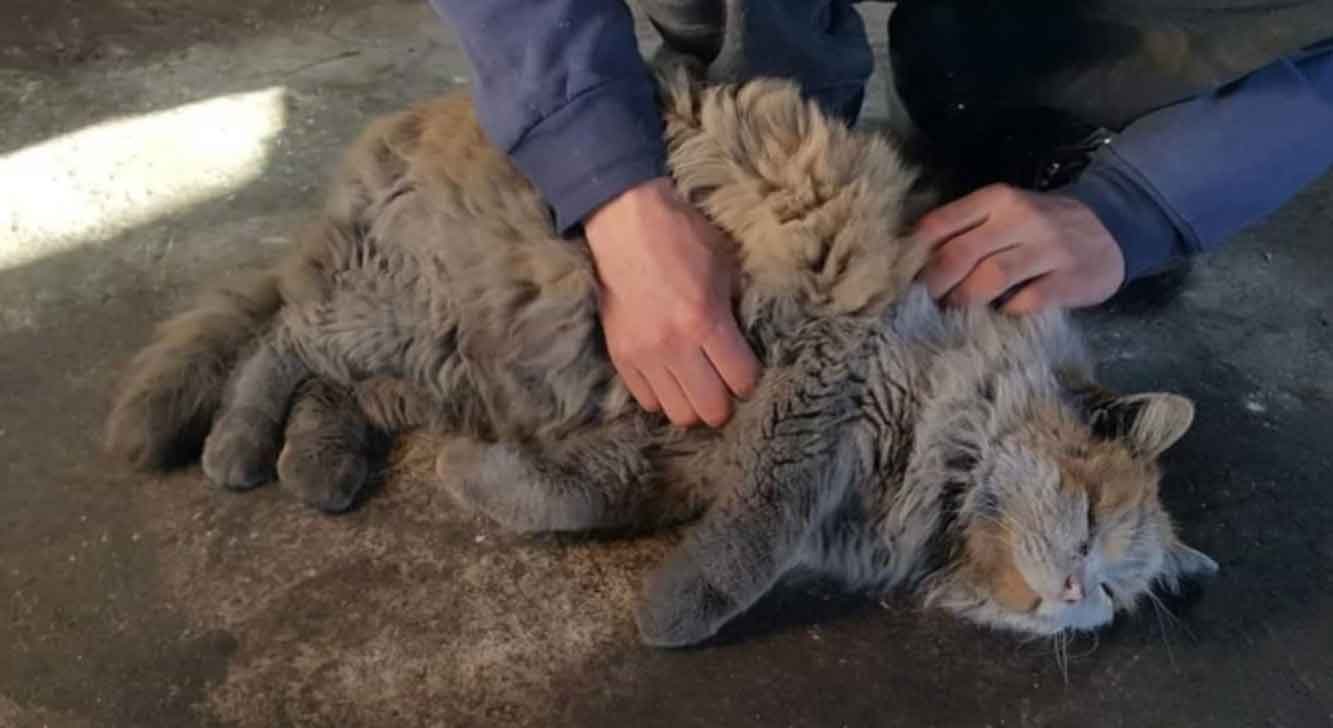 There’s no denying that Dirt has become a star, Eric says: “I do love it when Dirt gets shared to other places without the museum’s name attached so that people can recognize him. We had a lady come to visit yesterday who saw his picture in the gift shop not realizing she was at the place where Dirt lives and when she recognized him she was overjoyed with excitement.” 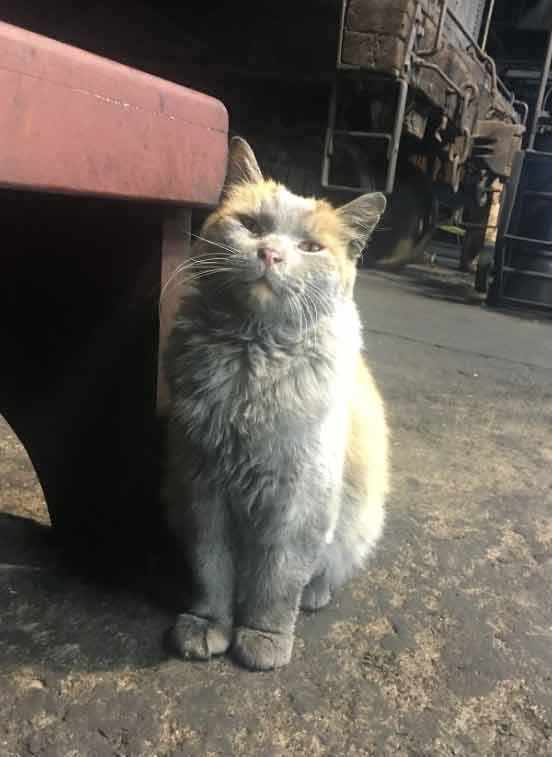 This kitty loves his job and takes it very seriously while at the same time stealing the hearts of everybody that sees him.

Click here to meet the eyeless cat that sees with his heart!

Woman Rescues 21-Year-Old Cat Abandoned By Owner, To Give Him Best Remaining Days

Woman Rescues 21-Year-Old Cat Abandoned By Owner, To Give Him Best Remaining Days

Stray Cat Brings Weak Kittens to the Man Who Feeds Her

Stray Cat Brings Weak Kittens to the Man Who Feeds Her

Six Years Ago, a Man Saved a Stray Cat and She Hasn’t Stopped Thanking Him

Six Years Ago, a Man Saved a Stray Cat and She Hasn’t Stopped Thanking Him