It was an emotional moment when Raymond McNamara was reunited with his 20-year-old blind cat, Lily, after she was lost for two months in Florida. They had been traveling cross-country from California together when the long-haired Himalayan wandered off and got lost. Devastated, McNamara alerted the authorities for help.

Kathy Bieniek, the vice president of Saving Sage Animal Rescue in Miami, told ABC news: “We organized the search party trying to find her but unfortunately she was not found. He left thinking his cat was gone. Two months later I got a message on Facebook that a lady found a cat at the construction site where she was lost. We pieced it together … that was definitely was his cat. Lily did not have a microchip, but I had his mom’s phone number from when I was dealing with him earlier.” 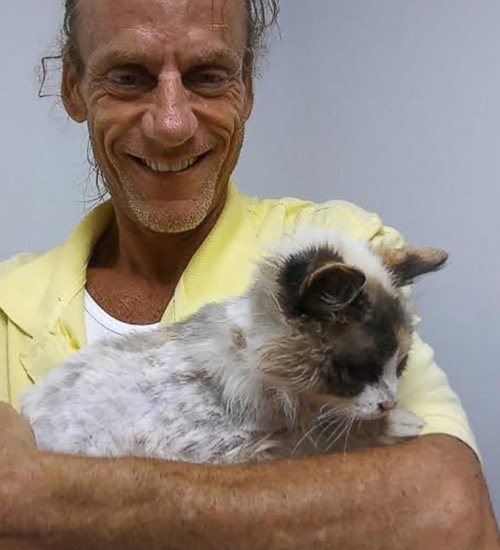 Lily, who is blind and deaf, had managed to survive for two months on her own in the heat, and in the bad weather with torrential rain. She was terribly matted and sick. But she was now in good hands and Kathy and the staff nursed her back to health. Once McNamara arrived, he was overcome with emotion to see his best friend again. “He broke down in tears and is never going to let her out of his sight again. She is his world,” said Kathy.